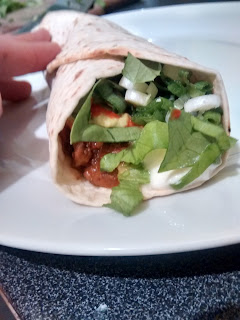 In this wonderful and magical world, which also happens to exist if you're following my cooking-for-one menu plans, you've already made a magnificent bolognese, and then converted some of that into chilli con carne, and saved a couple of tablespoons of that for tortilla. (You only need 1-2 tablespoons of it per tortilla, I know it sounds like nothing but trust me.) So this is really collation, more than cooking. The quantities here will make 2-3 tortillas. I can usually eat one or one and a half. Will usually eats two and the half I didn't eat. 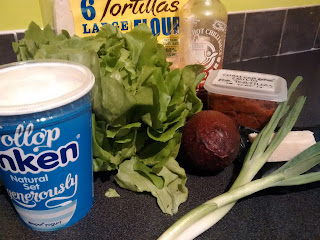 The ideal ingredients list: your tortilla mix from the chilli con carne, defrosted; lettuce; spring onion; yoghurt; cheese; avocado; tortillas; chilli sauce; and the ingredient I forgot, fresh coriander leaves. Don't worry if you don't have all of the. Avo is the one I leave out most often, cos it's hard to grab an avo in the UK in the two seconds between hard-as-rock and rotten. This time, I was unusually blessed. 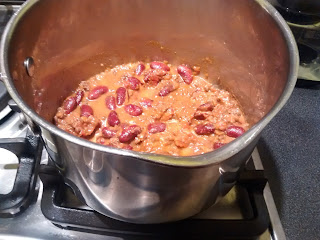 Pop the tortilla mix in a pot to heat, with a splash of extra water to help it saucify. 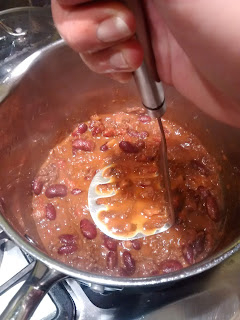 If the kidney beans are still quite whole, mash them up a bit. 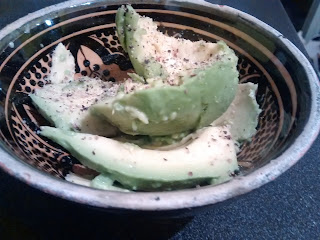 If you're blessed with avo, cut it in half, scoop out the insides, and mash it with salt and pepper, using a fork. The salt and pepper help give the fork grip, as well as flavouring it. Guacomole usually calls for much fussing about with onion or lemon juice and garlic, but that's not necessary here. 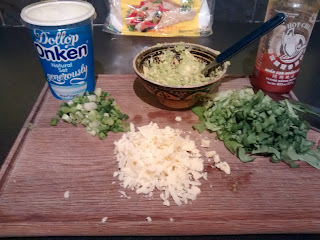 Finely slice a bit of the lettuce off (about an eighth, for 2-3 tortillas), chop 1-2 spring onions, and grate some cheese - about as much as you can grab between your fingertips for each tortilla. (1 tablespoon?) The yoghurt and the chill sauce have also reported for duty. 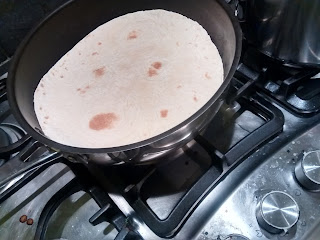 Heat the tortillas in a frying pan on a medium heat. I put the stack in and then turn them appropriately. Actually, turning more than 3 tortillas or pancakes to heat them all evenly in a logical sequence is an unsolved maths problem, so if you work it out while you're doing it, let us know. But if you're cooking a large number, take the engineer's solution, and heat them in the oven instead. 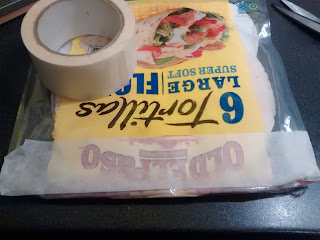 The tortillas not being used get closed up with masking tape, to keep them fresh longer. 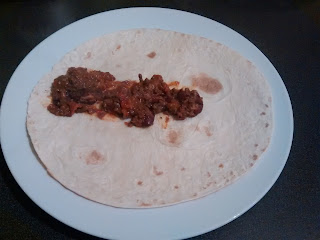 Assemblage time! Each tortilla gets a spoonful or so of the meaty mix, in a stripe, two-thirds of the way down. (Not the most attractive picture; the early dark and kitchen lighting isn't favourable to pictureseque photographs.) You can add all the other ingredients in any order you fancy, but I am fussy and pedantic and this is the order I do: 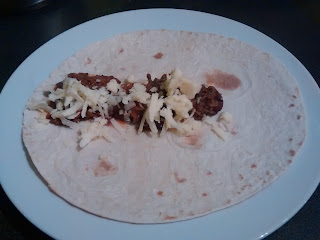 Cheese next, so the meaty heat will melt it 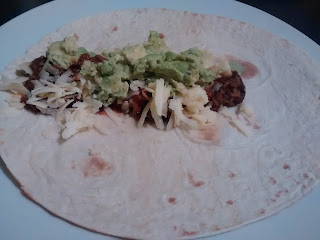 Avo next, because it doesn't mind a bit of heat 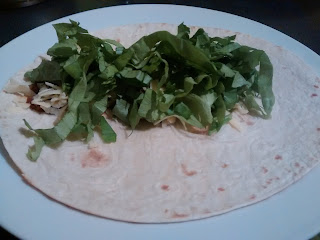 Lettuce next, further away from the heat 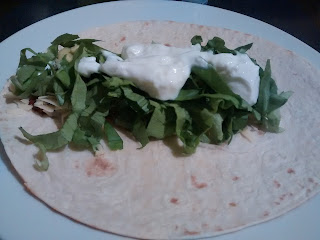 Yoghurt dolloped across the lettuce 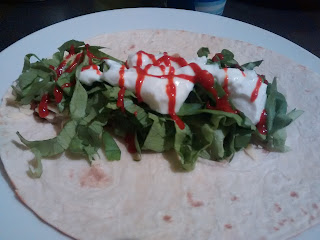 A goodly squeezing of chilli sauce 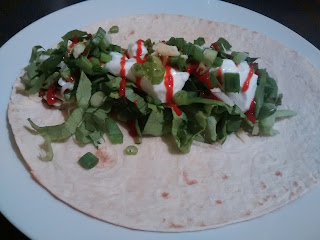 A sprinkling of spring onions.

The tortilla have been FILLED. Next: the rolling of the tortilla! 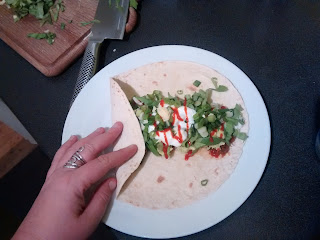 Fold the bottom up first, so it can't drip out the end. 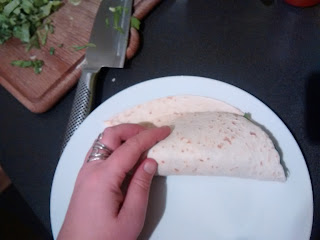 Fold one half over, more than half way... 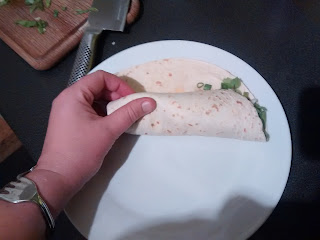 And pull it back, lovingly enfolding the ingredients.

Foll the other half over. Doesn't that look gorgeous? 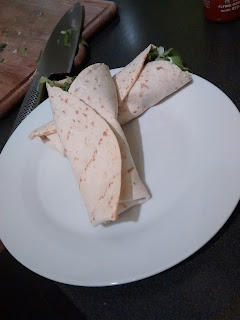 Well, you know it's gorgeous. But actually two beautiful scrumptious tortillas on a plate don't look gorgeous, not with a whole lot of extra lettuce and garnish and such-what. So if you're serving this up to other people, just save yourself the assembly time and put all the dishes of fillings on the table, with a stack of oven-heated tortillas, and let them all have the fun of assembling their own.