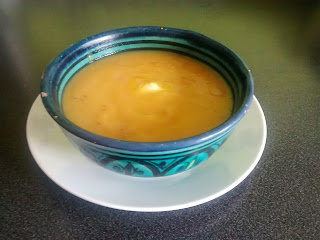 This is one of the cooking-for-one week-2 meals, though it feeds considerably more, depending on the size of your butternut and appetite. (This made enough for six.) I made this on Sunday evening, to eat on Monday, so it could cook while I did the roast.

When I lived in South Africa, butternuts were cheap as potatoes, if not cheaper; they've thankfully started to come down in price in the UK, so it's no longer a very expensive home taste. Many people feel the need to throw curry powder at every squash they see, which I don't like. I'm a massive curry fan, but a) there's no such thing as "curry powder" (or shouldn't be), and b) the butternut is plenty heavy enough already without being weighed down by the spice base-notes that "curry powder" tends to feature. In South Africa, I used to make butternut soup with one crisp apple (Granny Smith), the juice and zest of an orange, and milk instead of water. I discovered really, really tart cooking apples in England. Bramley apples are not tart: they're just floury. But tart apples... One morning, I bought a little bagful on the street from an elderly man , who was selling from his allotment, and walked onto teach, and tried to munch one of the apples. My mouth tried to turn inside out and all my saliva glands squirted at once. It was extraordinarily thrilling. I tried a few more mouthfuls, just to replicate the experience, but couldn't make it through the apple. When I got home, I tried making butternut soup with them, and they were the perfect clear-juice cut-through to the heaviness of the butternut. Perfect! 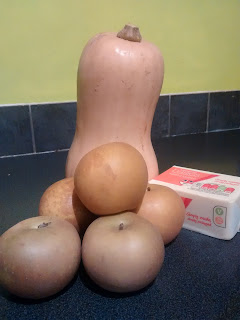 Ingredients: 1 butternut, the same quantity of apple, butter. That's it. If you're vegan, use oil instead of butter.

NB: Do the apple test. Bite into one of the apples. If it makes your mouth try to turn inside out and all your saliva glands squirt at once, perfect. If not, take away half the apples and replace them with a large onion, otherwise the soup will be far too sweet. 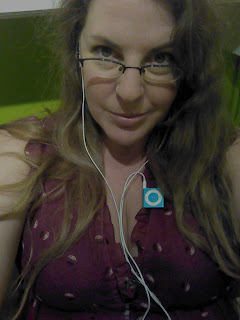 If your Radio 4 listening / playlist disturbs People Who Are Reading, have your own private iPod party. 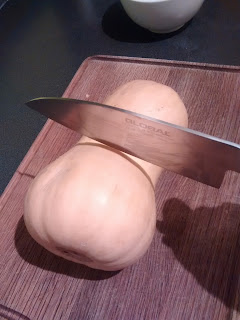 If you're unfamiliar with butternut construction, all the seeds are in the round bit at the bottom. So chop above that, first off. 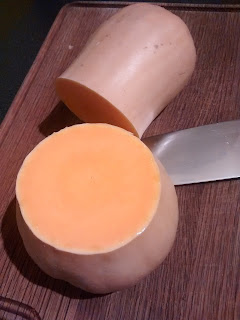 See? The top half is all flesh. 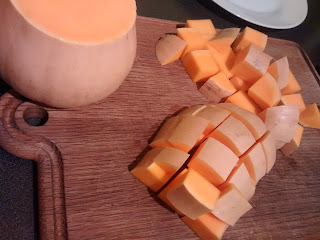 Chop it up, into goodly sized chunks. An inch or so, but soup is forgiving of varying dimensions. (An inch is a couple of centimetres, to my metric friends. I'm an 'orrible hybrid of metric / Imperial, these days.)
There's no need to peel butternut. For anything. Ever. 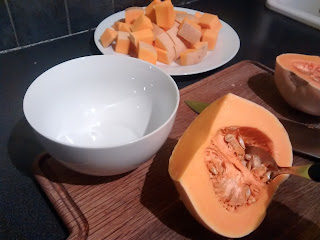 Chop the bowl of the butternut in half, and scrape out the seeds. All the fibry things want to cling, so scrape the spoon nice and hard round the curves. 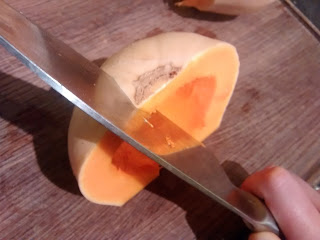 Cut the base bit off. 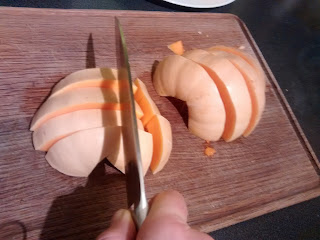 Chop the bowl into chunks as well. 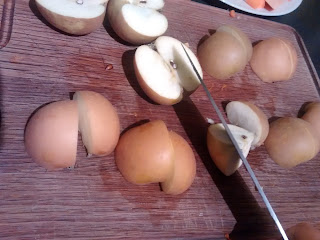 Quarter your apples, cut out the core bits, and chop the quarters in half. 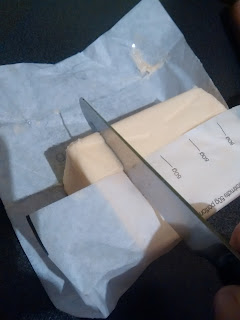 50g of butter should do this nicely. I love that butter comes with handy little measuring-things. If it doesn't, most blocks are 250g, so just eye it up and mark it into fifths. Put the butter in a big pot to melt on medium-hot. 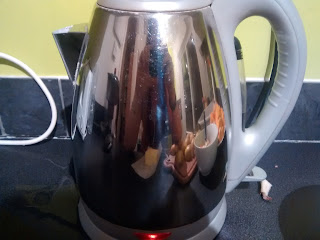 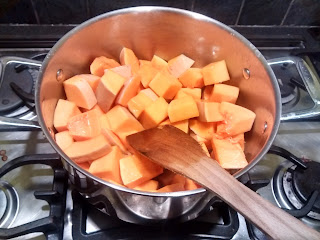 Toss the butternut in the melted butter on the heat until it smells nice and butternutty. (I always judge soup pre-frying times by when things release their fragrance.) 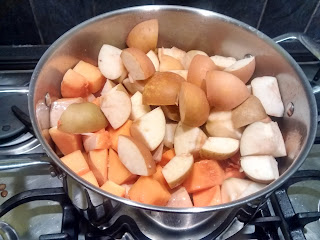 Add all the apple, and toss that in as well. 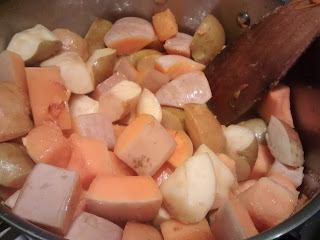 When the apple is starting to smell good too... 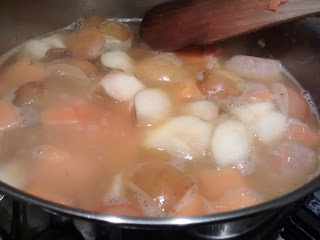 Cover the whole lot with water, enough that it can swim a bit. 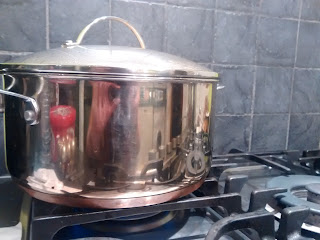 Leave to simmer on a low heat for 30 minutes. (Conveniently, that's about how long the roast will take.) 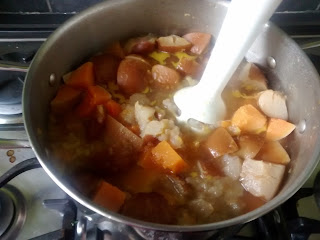 When it's done, blend the whole lot up, very thoroughly. Stick blenders are one of the best things in the world. 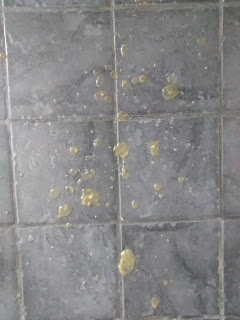 Try not to do that, though. 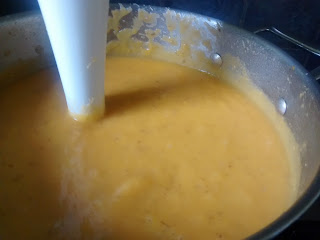 Perfectly blended soup. Most of this will go in the freezer, one small bowlful will be my early lunch on Monday.

A bowl of butternut soup. If you wonder why restaurant soup always tastes so good, that's because they don't stint on butter and cream. And they also monter au beurre, which means lobbing a knob of butter into the soup just before you serve it; you can see the bit of butter melting beautifully there.

CONFESSION:
I couldn't get any off-someone's-tree apples, bought some new cooking apples to try out from the supermarket, and didn't do the apple test. So my vat of butternut & apple soup is quite extraordinarily sweet. I'll fix it by adding some onion and some extra squash - not butternut; we've got a gourd and a giant pumpkin I never got round to carving which are both in the cooking queue, so some of one of those will go into the soup. I'll fry the onion and the extra squash up, give them just enough water to cook in, and blend the whole lot with the butternut soup.

UPDATE: I fixed it when I made the kedgeree bake. I also learnt the valuable lesson that gourds, unlike butternuts, do need to be peeled. But actually scraping the soft roasted flesh away from the hard skin was easier than peeling it would've been. Had I known, I would have cut the gourd in half and deseeded it, and then just basted and roasted the halves like that. So now I know. And so do you!