When I began to blog, I also started photographing simpler dishes, for friends who weren't taught to cook at home and didn't spend swathes of their childhood sitting on the kitchen counter chatting to Mum and co-incidentally witnessing dozens of techniques and orders-of-cooking.  "It's like computers," I explained to one friend, who was frustrated by his own ignorance. "If you just grow up doing it, like we did, then it's simple and easy, but actually there are all these little things you learnt along the way. And if you didn't, it feels like there's so much to learn, and you're just expected to know, and no-one's teaching you." No-one should be left out. Cooking is a joy.

Email ThisBlogThis!Share to TwitterShare to FacebookShare to Pinterest
Labels: learning to cook, novice-friendly 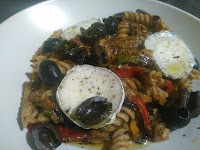 This one's a total winner because it's ridiculously fast, hugely variable, pretty damn easy, and relies mostly on store-cupboard ingredients.  I invented it when I was about 27 and living in Hythe Bridge Street, and me, Will, and my housemates got home at about 2 am, all thoroughly trashed, and everyone said they were hungry. And looked at me. Expectantly.

We decided the challenge should be to make the pasta sauce while the pasta was boiling (no extra time) and hence Spontaneous Pasta was born. I pretty much always have tinned tomatoes about, and pasta, and a few jars of olives (the cheap ones in brine, already depipped), that's the store cupboard stuff.  And then there are usually some herbs laying about the place and a chilli or two. And garlic. Always garlic. And really it mostly just gets blitzed up and thrown over the pasta to heat.

I sometimes forget about this for years and then sneer at the notion of it, and then make it again and realise OH HELL THIS IS HELLA TASTY. You don't actually have to make it at lightning speed while the pasta boils, but anything that can be made in ten minutes flat while drunk is fairly easy. And it tastes equally amazing sober. 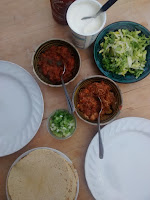 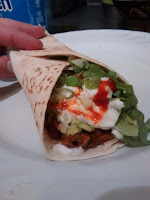 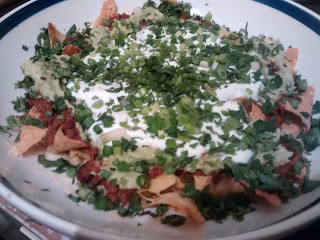 A spicy tangy chilli is the basis for tortilla and nachos. My meat chilli takes forever, slowly evolving from a magnificent bolognese through chilli con carne and re-emerging to appear in tortillas and nachos - the veggie one is a lot quicker! Prep time is about 5-10 minutes, cooking time is 40-50 minutes.

A good panful will still give you plenty to freeze, unless you're feeding a very large group - each tortilla only needs about 2 heaped tablespoons of chilli (about 50ml); for nachos, you need about 250ml of chilli per person. This recipe makes about 1.5 litres of chilli - that's about 30 tortillas, or nachos for 6. Or, nachos for 4 and then 10 tortillas, which would feed 4 nicely if 2 of them are very hungry, or feed 10 if they're all me and only want one tortilla each. You get the idea - whichever which way, you probably have enough to freeze some as well, and chilli freezes very happily and is even nicer the next time.