How to make a white sauce (bechamel)

"MOMMEEEEEE! MY WHITE SAUCE IS GETTING LUMPY!" Wail of my teenagehood echoing out the kitchen into the soft air next to the gigantic hibiscus hedge (two storeys high and more, you can lie in the extra-deep bath upstairs and stare out at blooming hibiscus) and Mom runs in from the studio and commits witchcraft with extra flour and rapid stirring, and the untenable white sauce is tenable once more.

When I was 18, living in Cheltenham and very enamoured that my new friends all spoke so many languages (they worked at GCHQ, I had no idea what that was), I was taught a magical secret to white sauce, so it never, ever, ever gets lumpy. Basically, you heat the milk first, and then you do the bit-by-bit milk-adding off the stove. Turns out this works even if you don't have a microwave to heat the milk and are using cold milk. It's the off-the-stove bit that really counts. The other great secret is the quantities, which I constantly forget and have to look up again and constantly recalculate, so this is for me as much as you. (Possibly more for me.) Also, don't abandon it. Nothing likes to be abandoned, but white sauce takes it especially badly.

Quantities for a thick white sauce, measurements adjusted to Human. The amount of milk is roughly the total amount of white sauce at the end. It works from 1 tablespoon butter (15g), 1 tablespoon flour (15g), and a cup-and-a-bit of milk (150 ml):

How to make white sauce

The principle: melt the butter gently, switch off the heat, stir in the flour thoroughly, add the milk bit by bit by bit, stirring it in thoroughly all the time (you can add faster once the mix is about the consistency of milk), put it back on a medium heat and whisk until it's thick. And now! In Pictures! 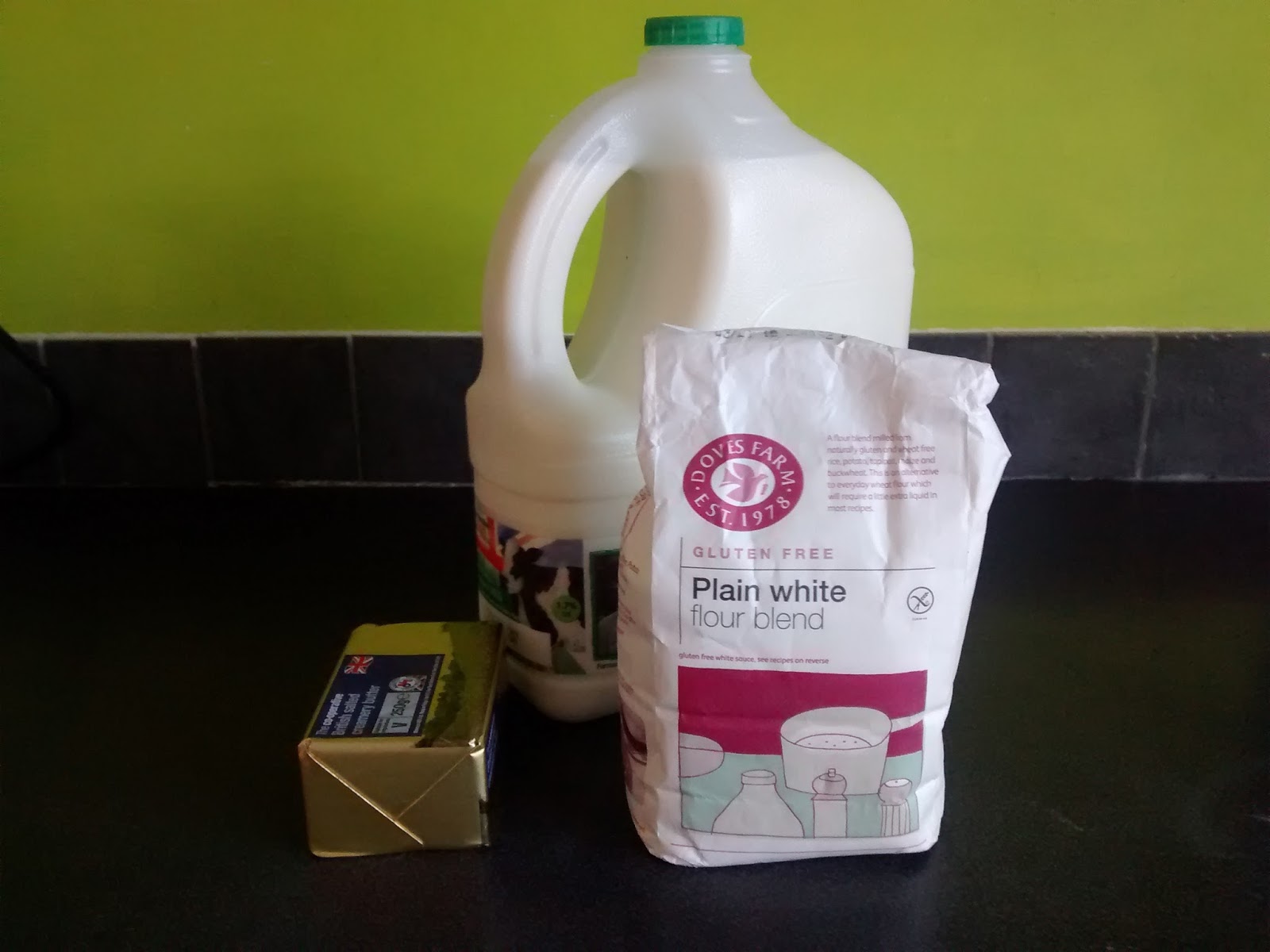 Hello, my little friends. Welcome to my white sauce! (The gluten-free flour isn't essential, it was just there, but it does make a good white sauce.) And I'm making MASSES of the stuff - SURPRISE! (2.4 litres. As you do.) 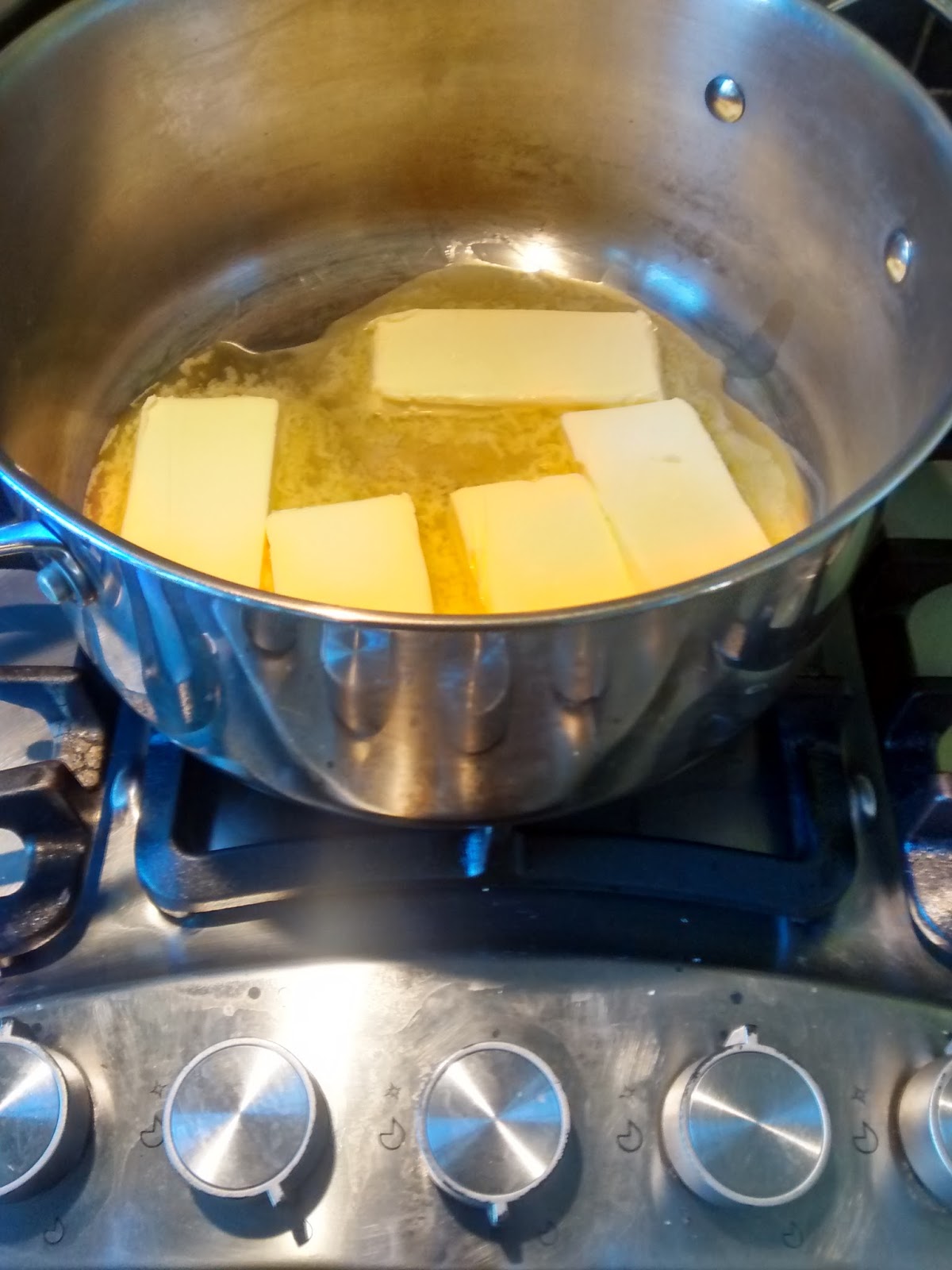 Melt the butter - note the low heat and that I've cut it up so it can all melt more evenly. 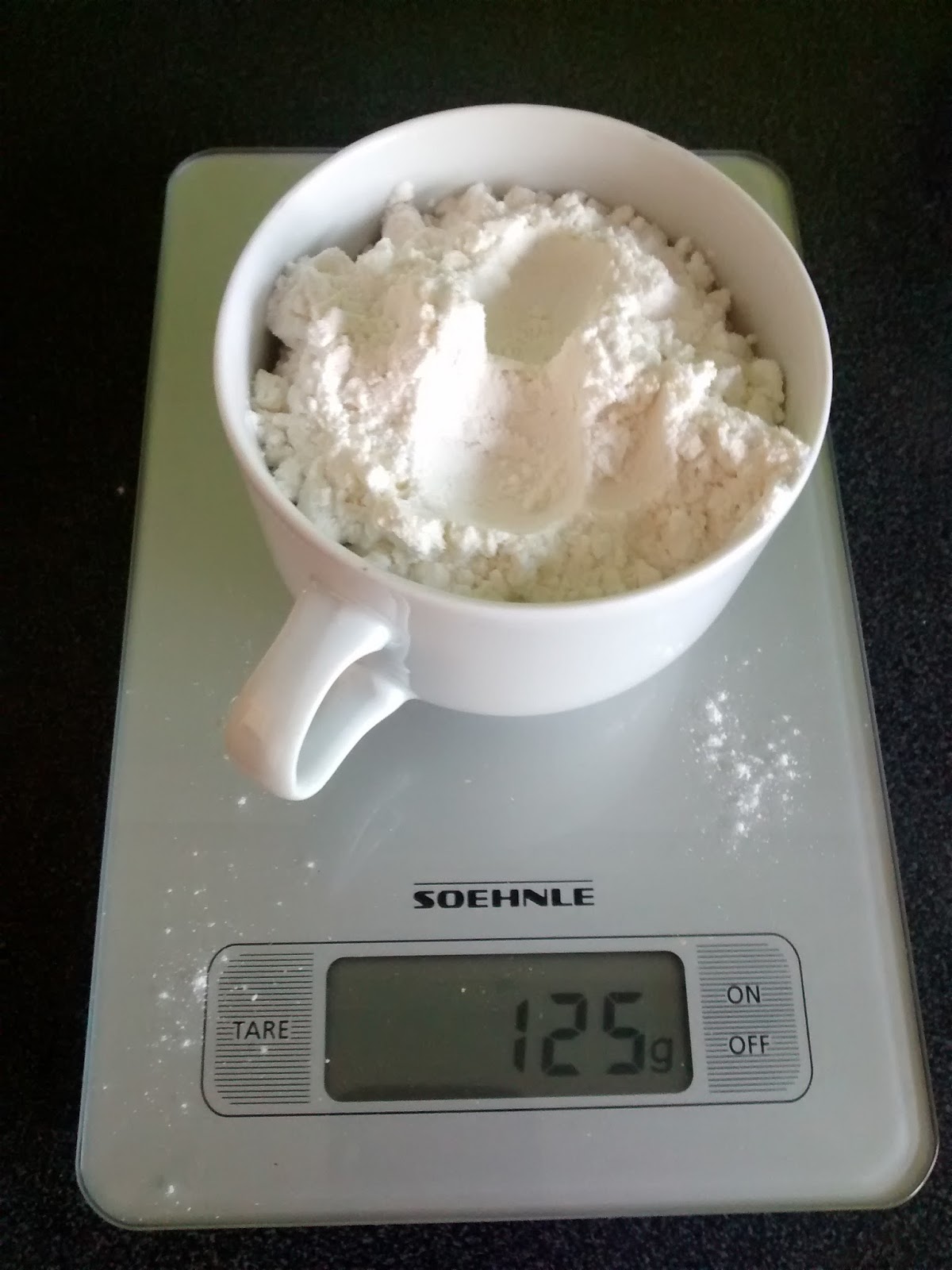 I thought I'd find out how much 8 tablespoons weighed. It's 125g, a teacup filled up as you'd fill it for tea. (If you were drinking flour.) 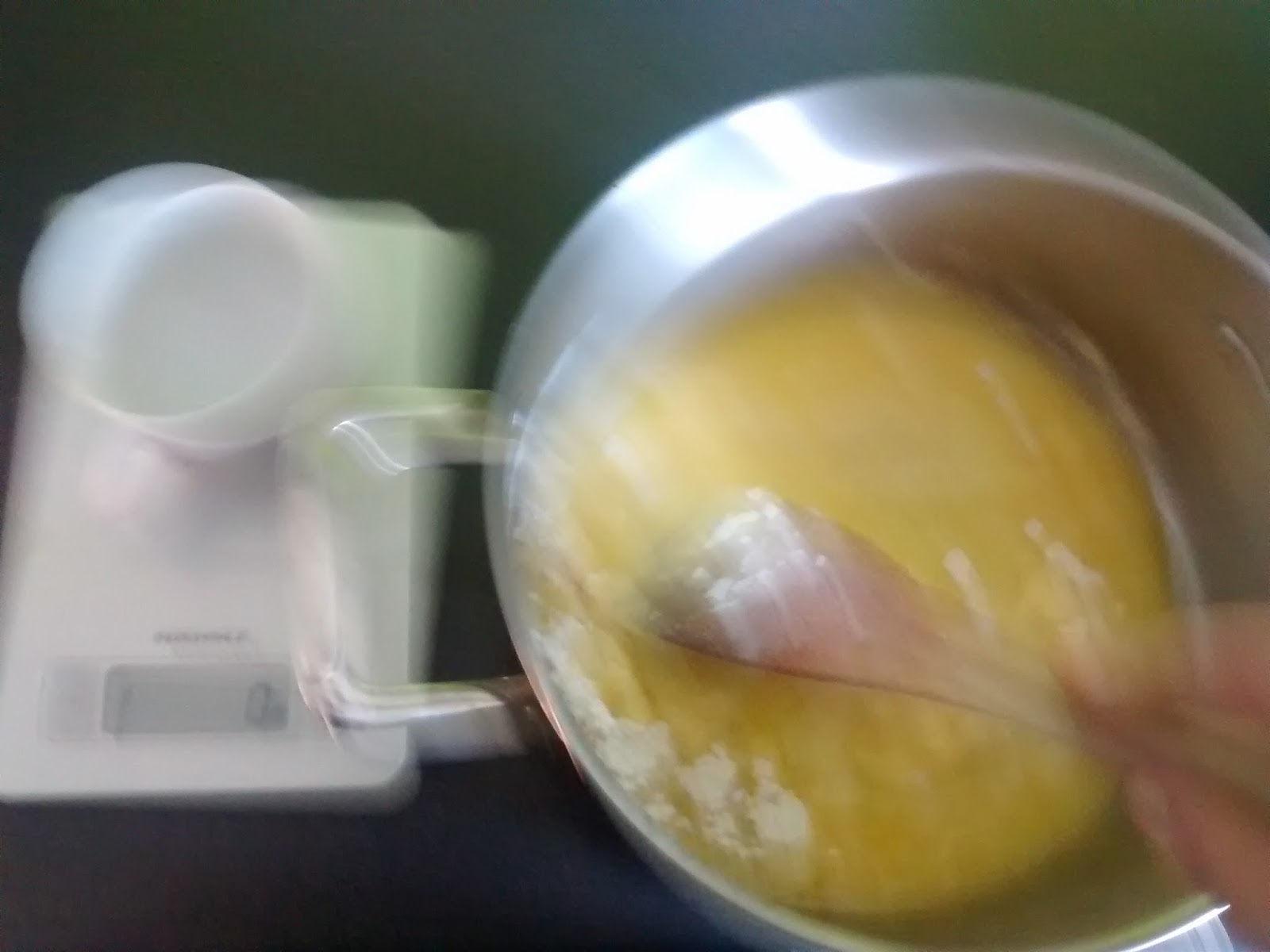 Once the butter's melted, pot is off the heat and I stir in all the flour nice and fast. Keep stirring until every lumpy bit vanishes. 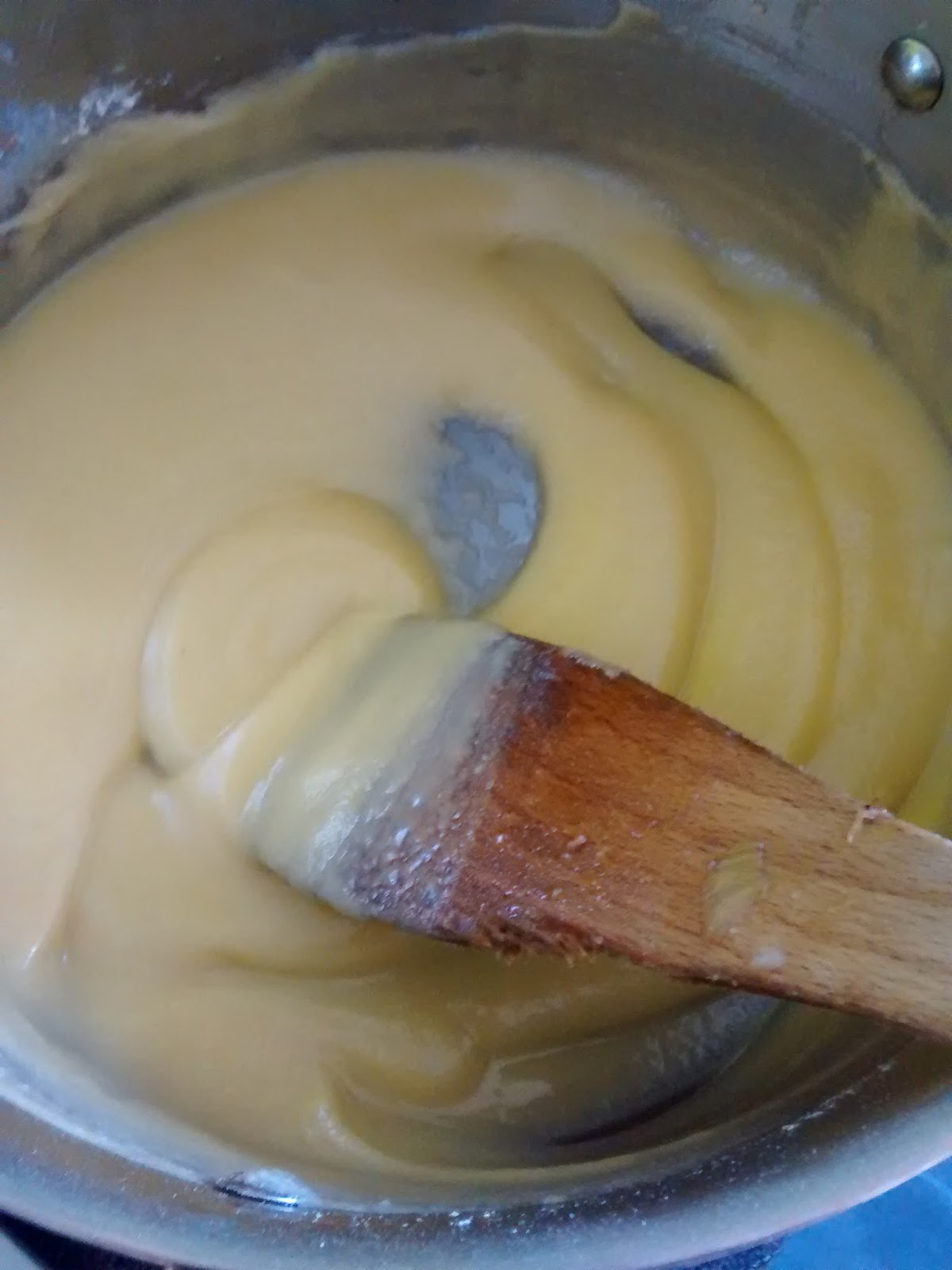 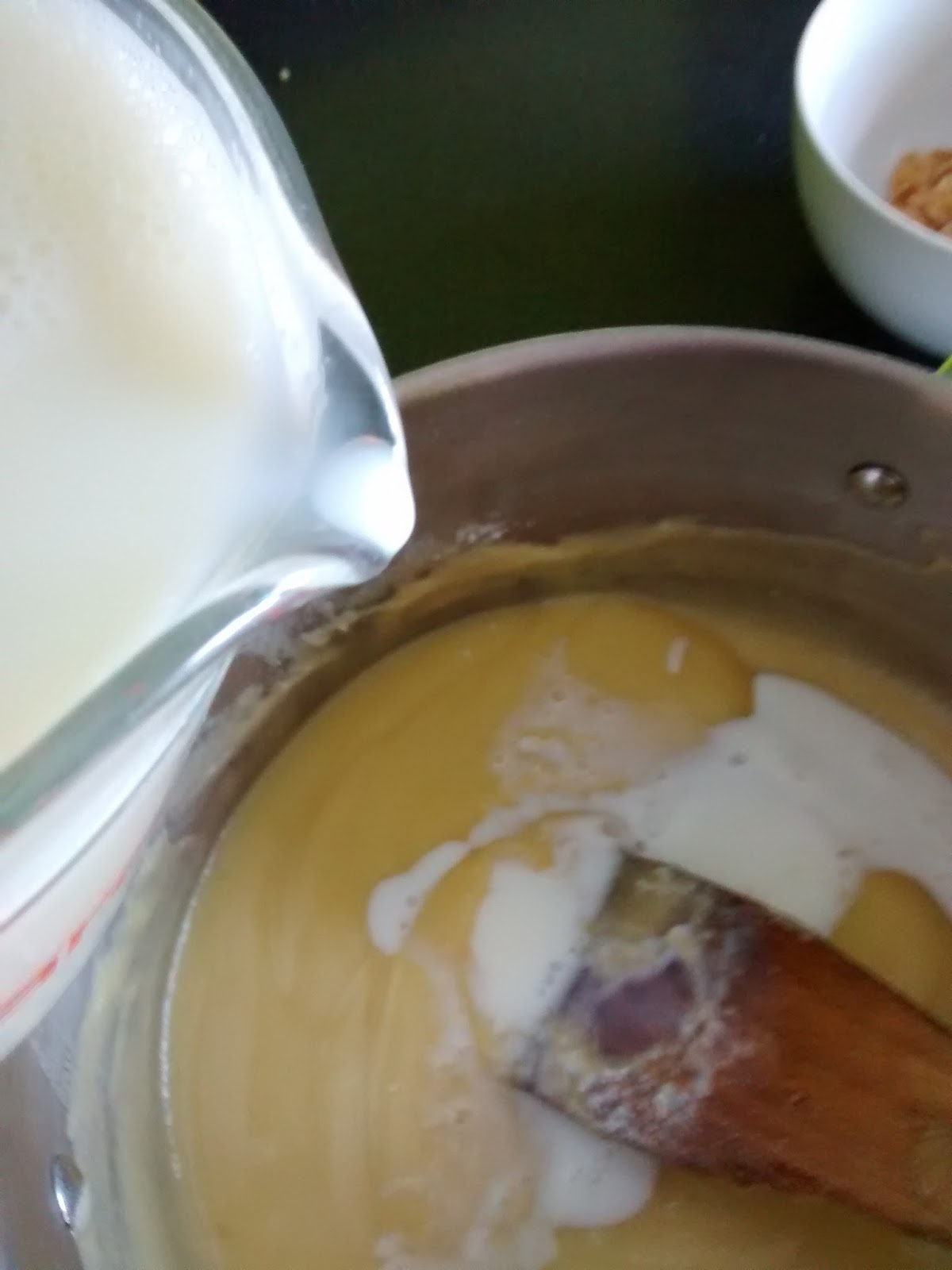 Add the first smidgen of a splash of milk, and stir... 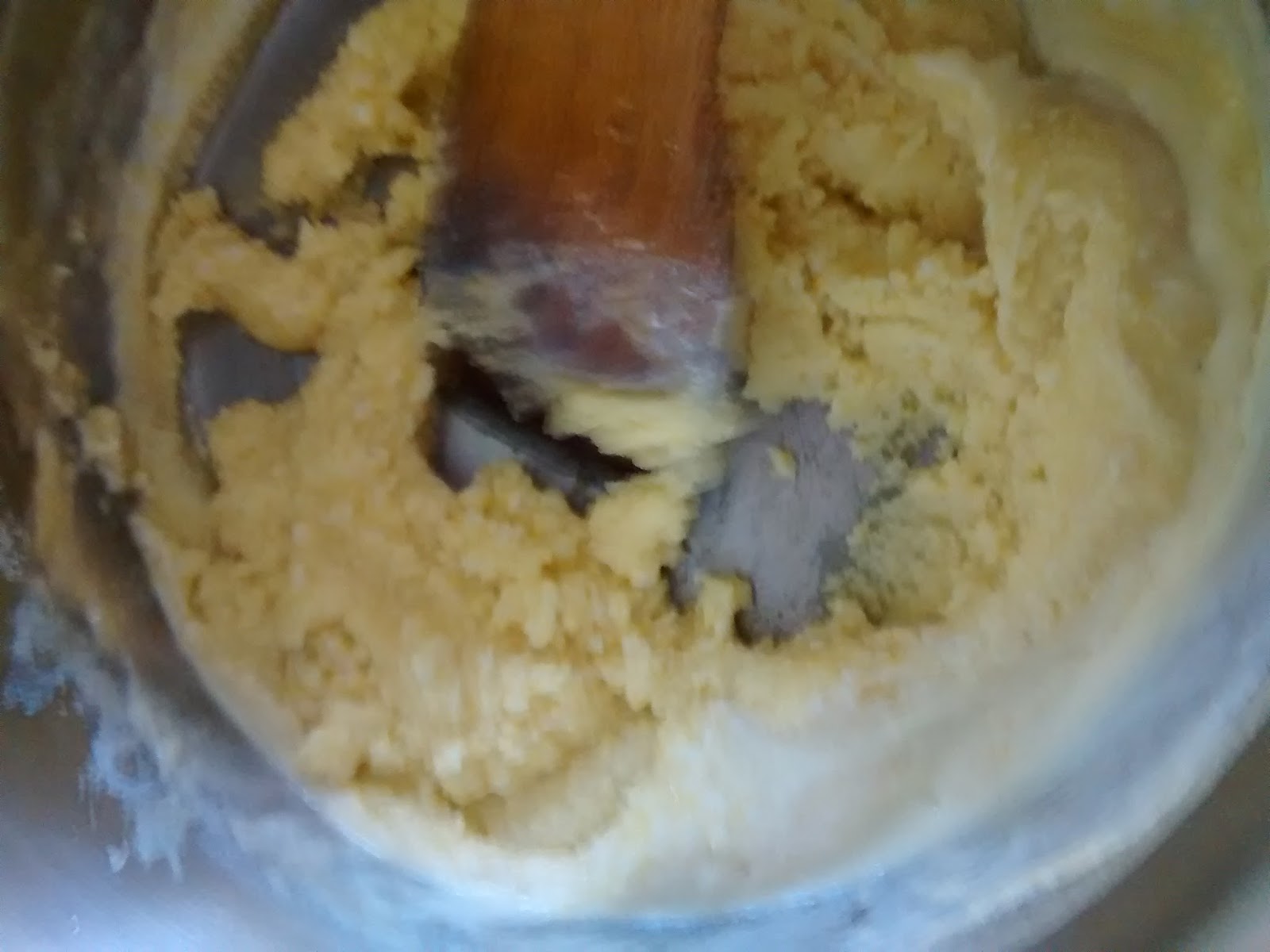 Yeah, it looks all crumbly now. Don't panic. Just keep adding a little splash of milk at a time, and stirring it in. 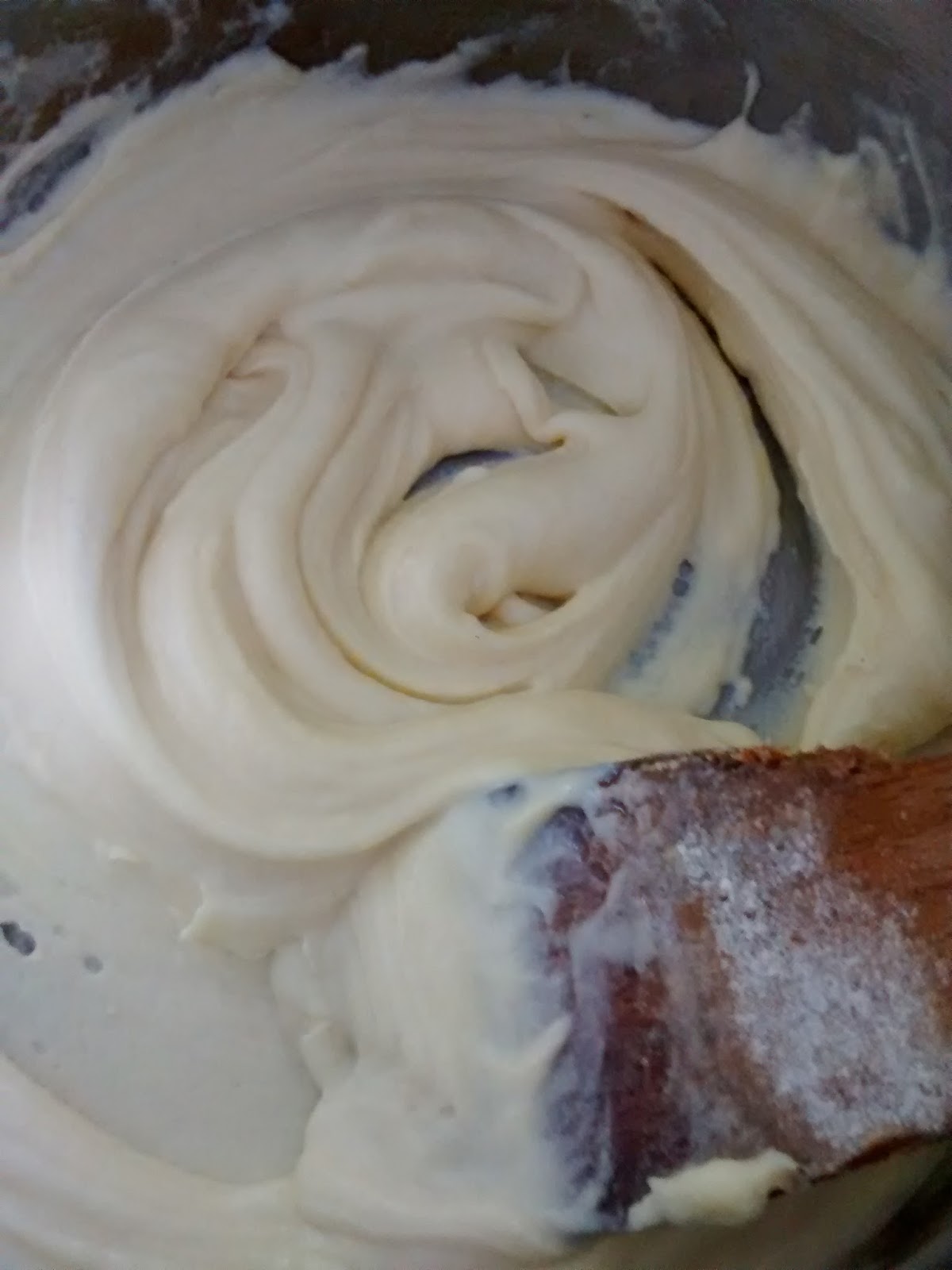 Starting to look all creamy and yummy... Keep adding the milk bit by bit and stirring it completely in in between. 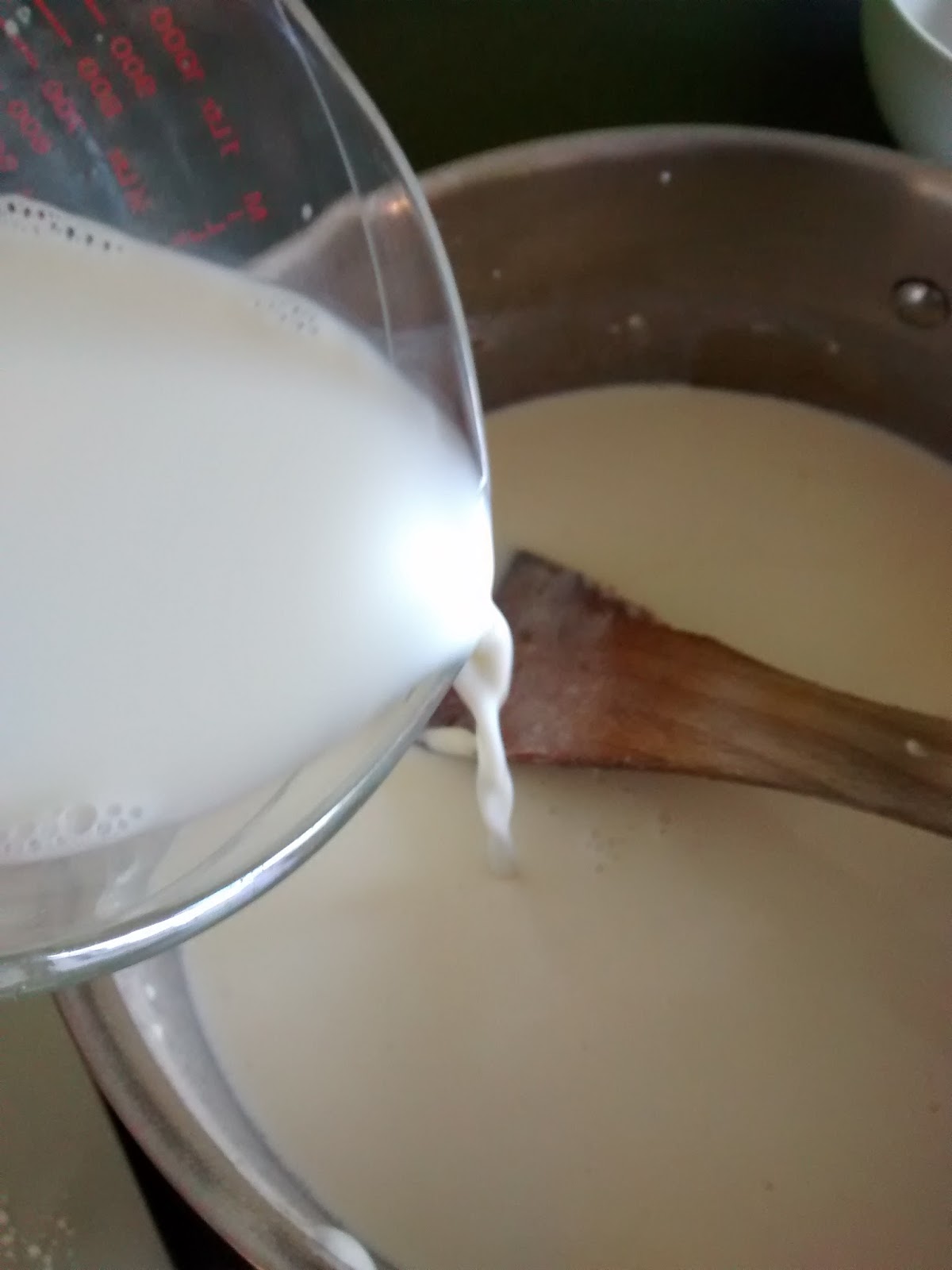 When the mixture is about the consistency of the milk, you can just pour more freely. 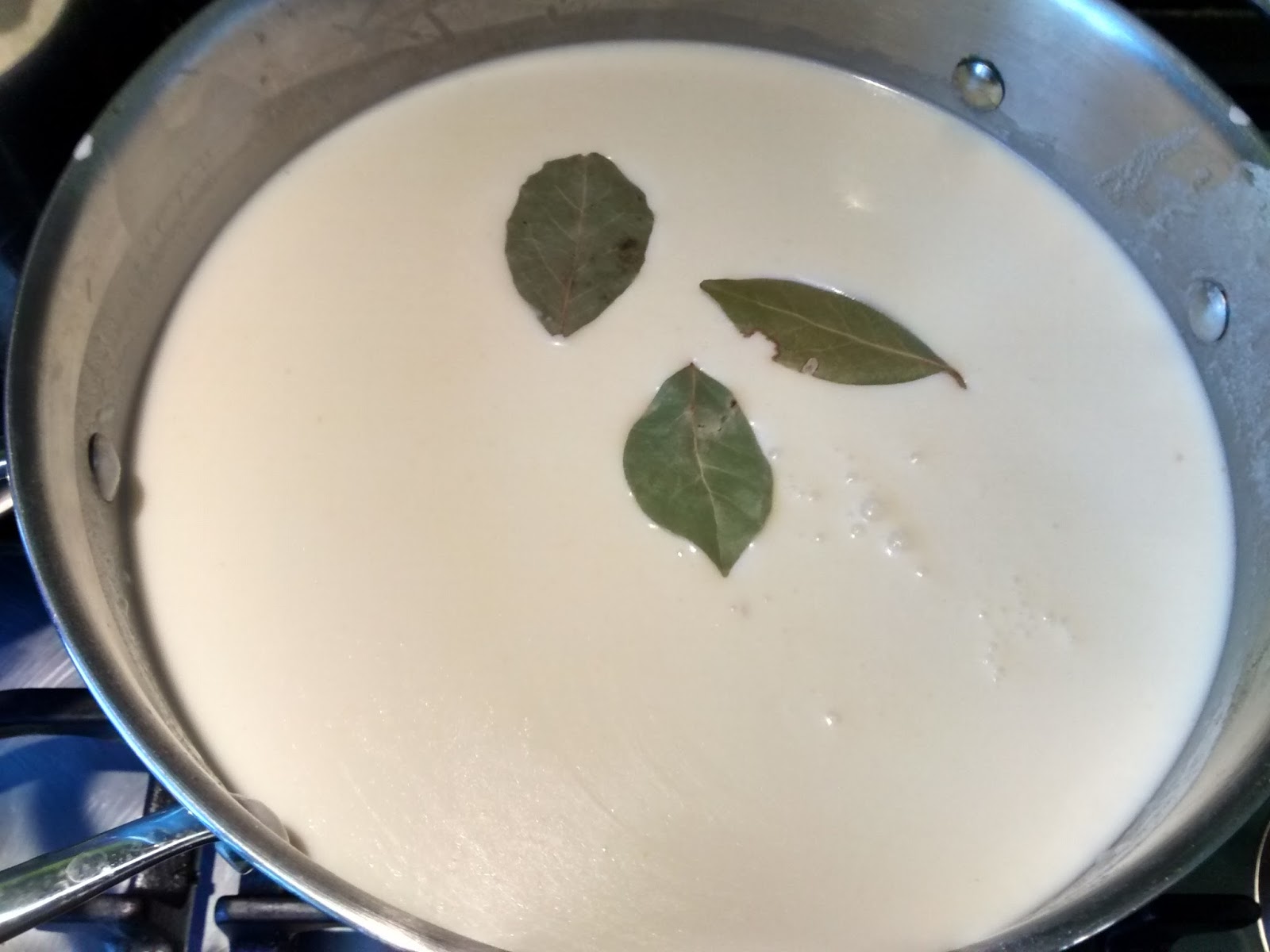 If you're adding bay leaves, or such things as nutmeg or cinnamon, this is a good moment. And you put the sauce back on the heat (medium)... 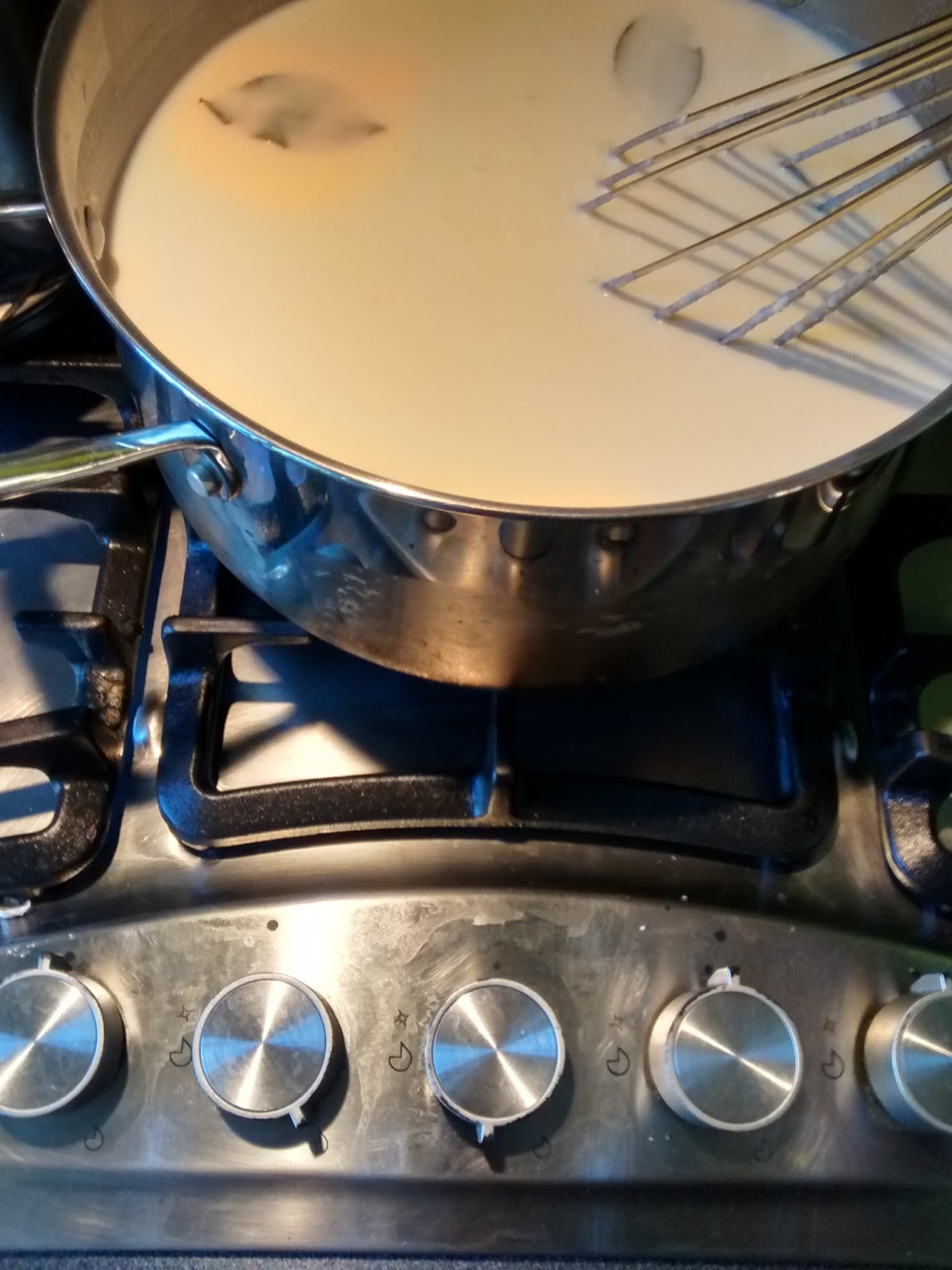 ... and start to stir. A wooden spoon will do, but a balloon whisk makes it easier to keep everything moving.
DO NOT LEAVE THE KITCHEN. DO NOT LEAVE IT UNATTENDED, EVEN FOR A MOMENT. NO MATTER HOW MUCH YOU'RE TEMPTED.
White sauce knows when you're not paying attention and punishes you. 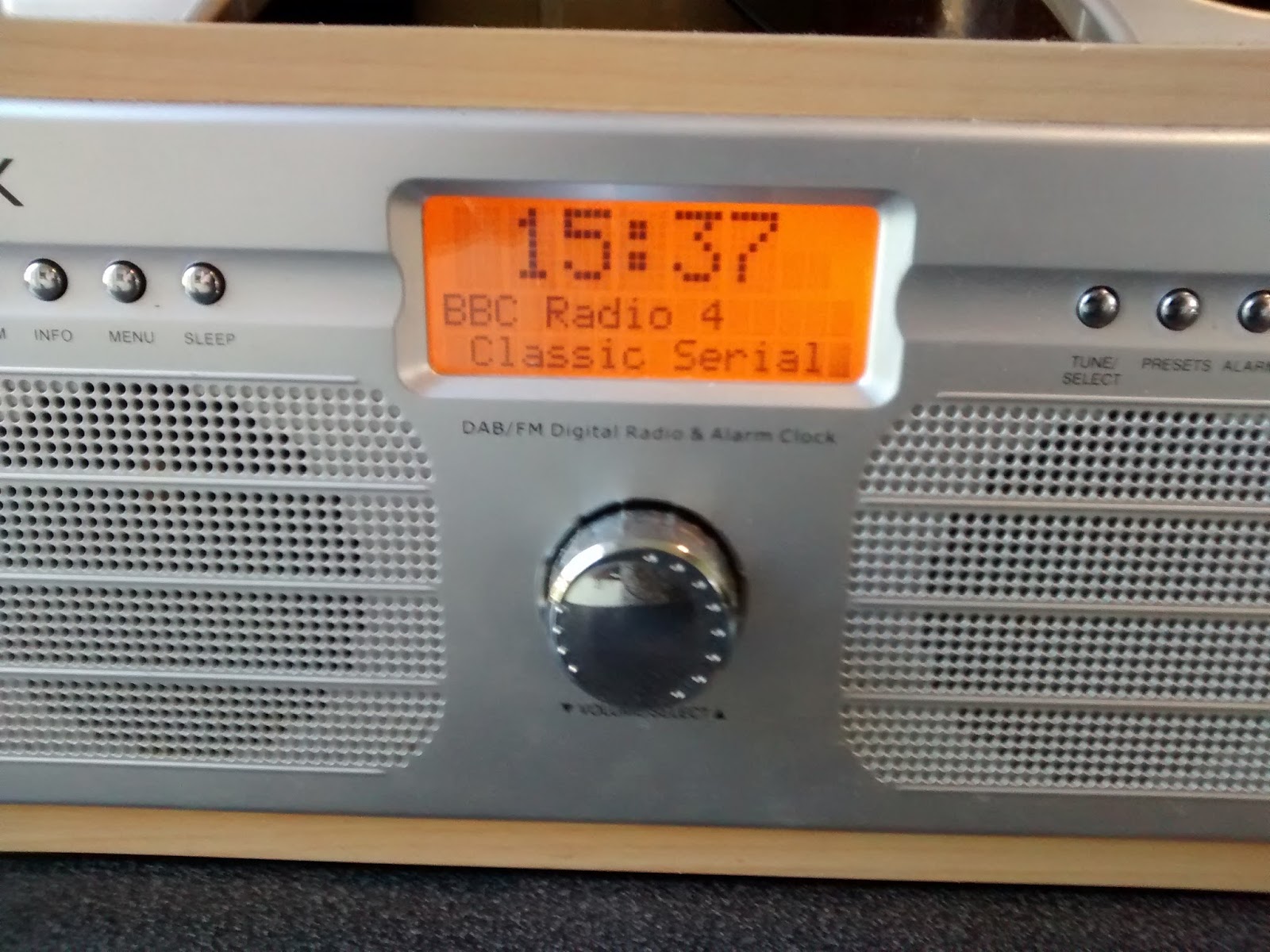 This is where your handy radio entertainment comes in. Peacably whisking and losing yourself in story... (Or thinking about your own story) I'd have preferred something other than Hemingway, but hey. 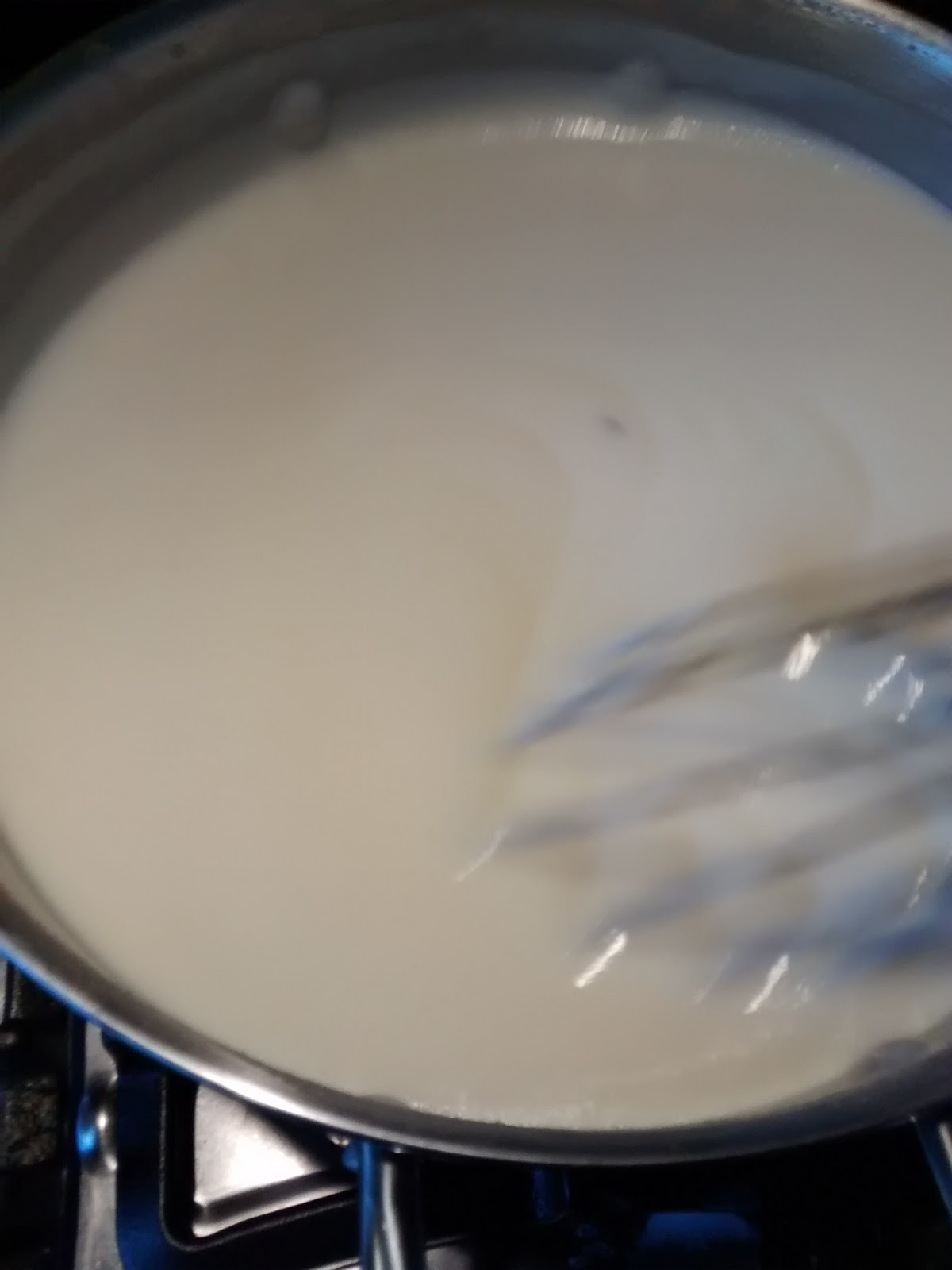 It seems like it will never get thick. But keep stirring. It will, unexpctedly. 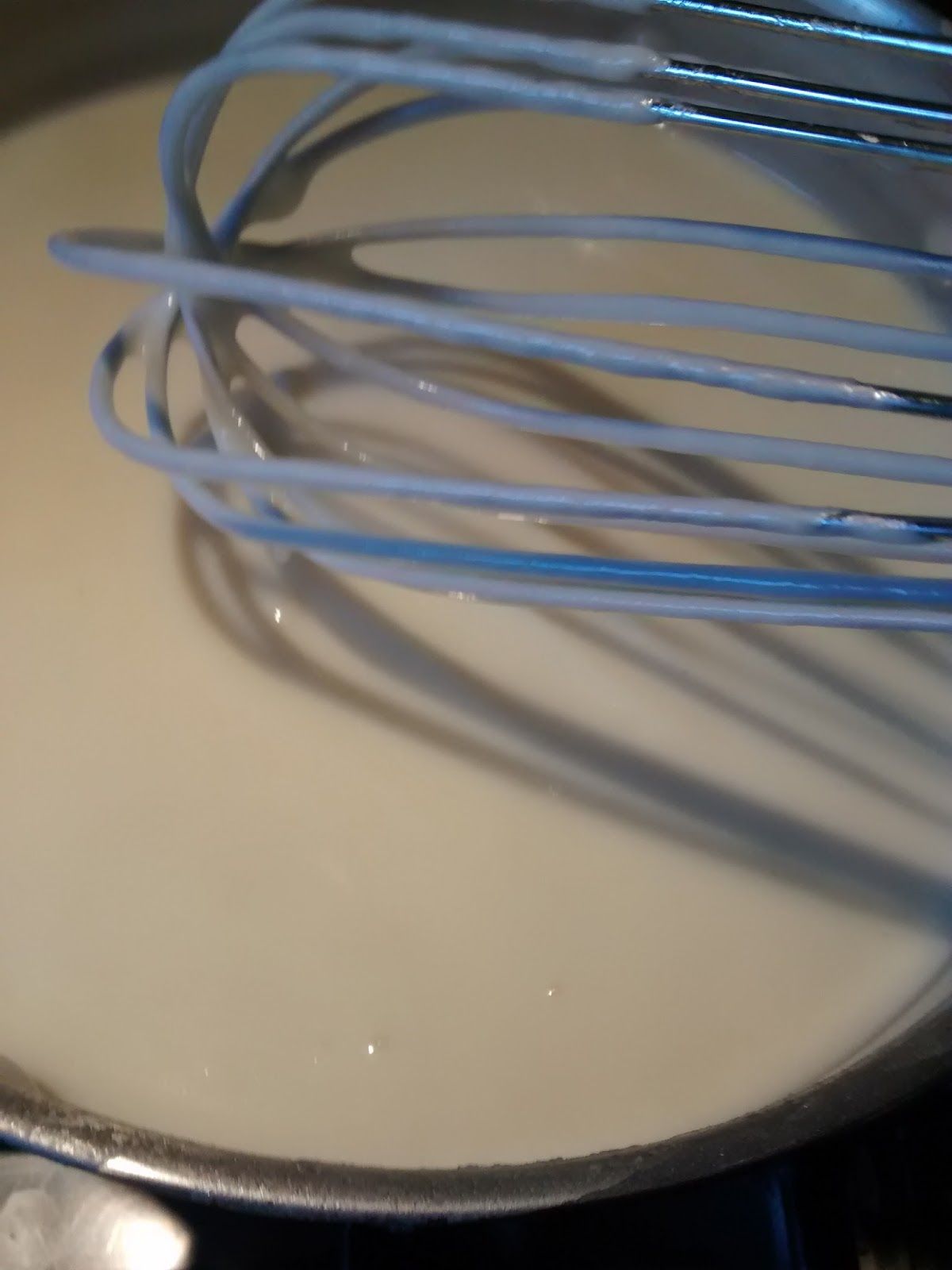 And suddenly it's thick enough to hold a brief whisk-impression (hard to capture on film) and has about the consistency, of, I don't know, thick custard? Hair conditioner? 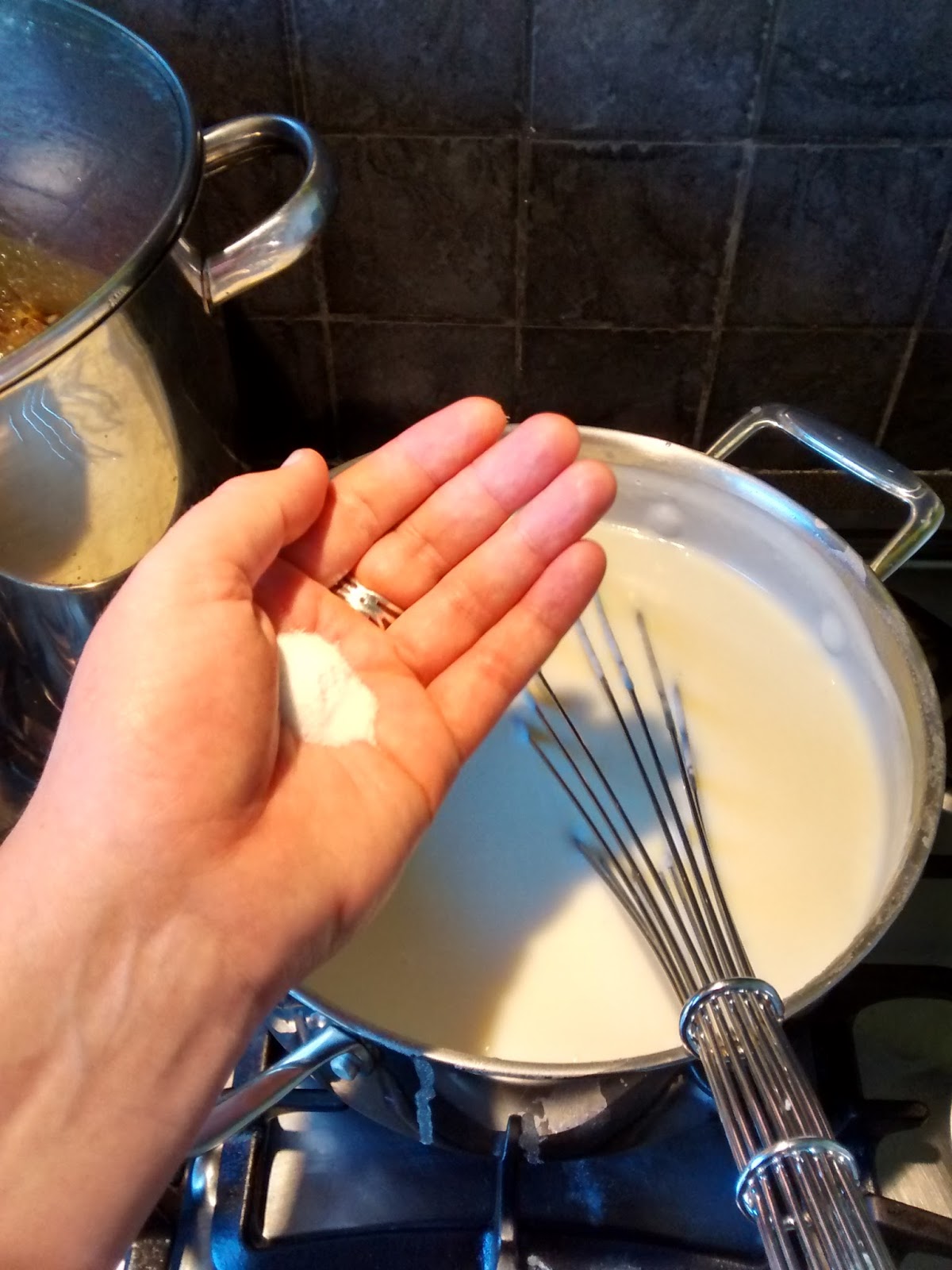 Tossing in some salt - a teaspoon free-measured into my hand... 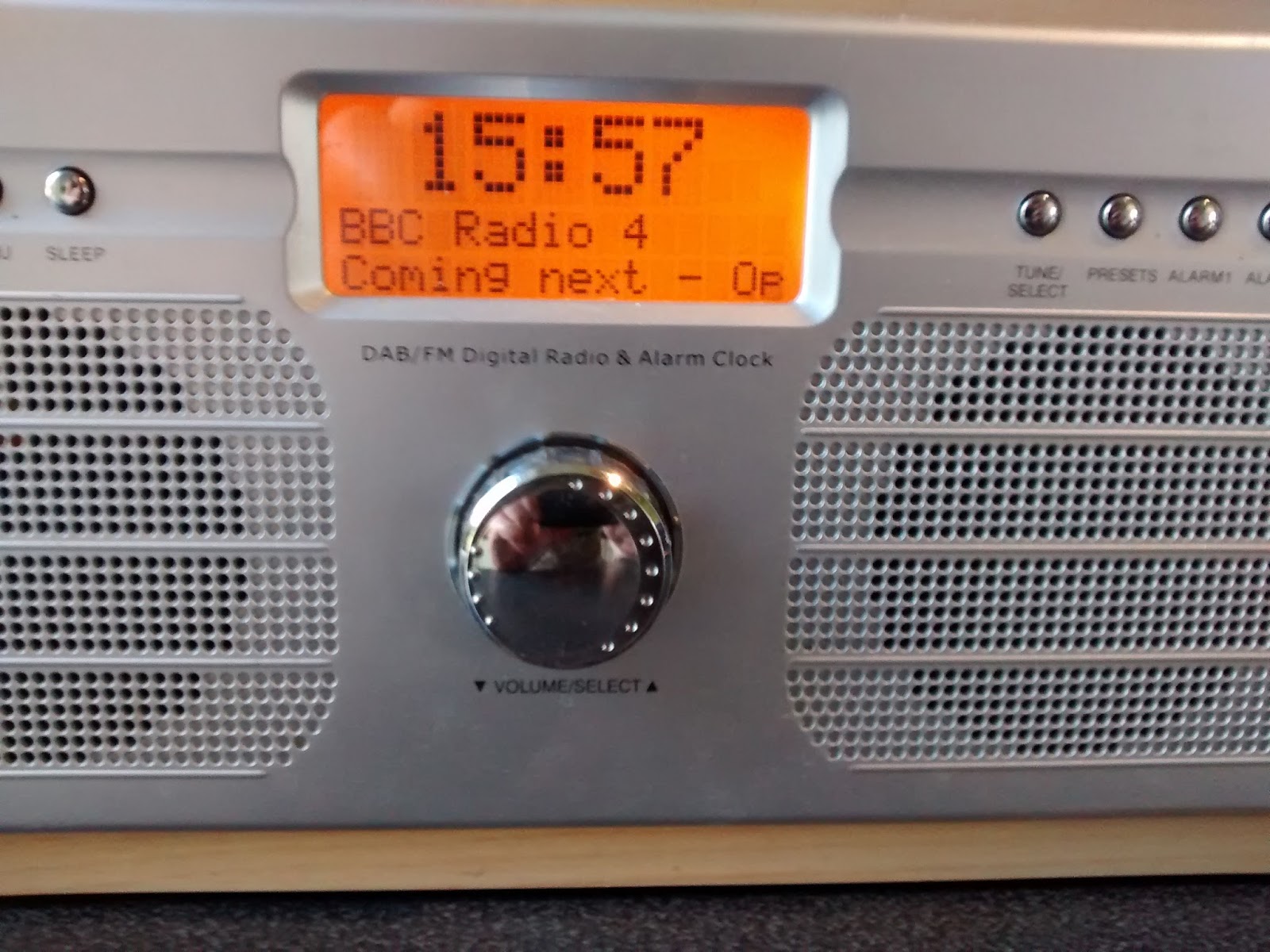 So for 2.4 litres, the whisking took 20 minutes and took me very nicely to the end of Hemingway's character being Very Important About Manly Stuff. (He died and told the lady person that "she was him now" which I felt showed a wanton disregard for her personhood and own ambitions.) Smaller quantities of white sauce will take less time, because there's less overall stuff to heat.

If it all goes horribly wrong, try yelling "MOMMEEEE...!" If no-one comes running in from the studio, then try these techniques:
Your splendid thick creamy white sauce is now ready for lasagne / moussaka / soup thickening / what you will, and as the cook you get to lick everything.
Posted by Megan Kerr at 12:55

Email ThisBlogThis!Share to TwitterShare to FacebookShare to Pinterest
Labels: how to, novice-friendly