This is one of the uses for the magnificent bolognese cascade and also one of the steps on the cooking-for-one meal plan. Once you've got your bolognese, the rest of it is really just heating and collating. 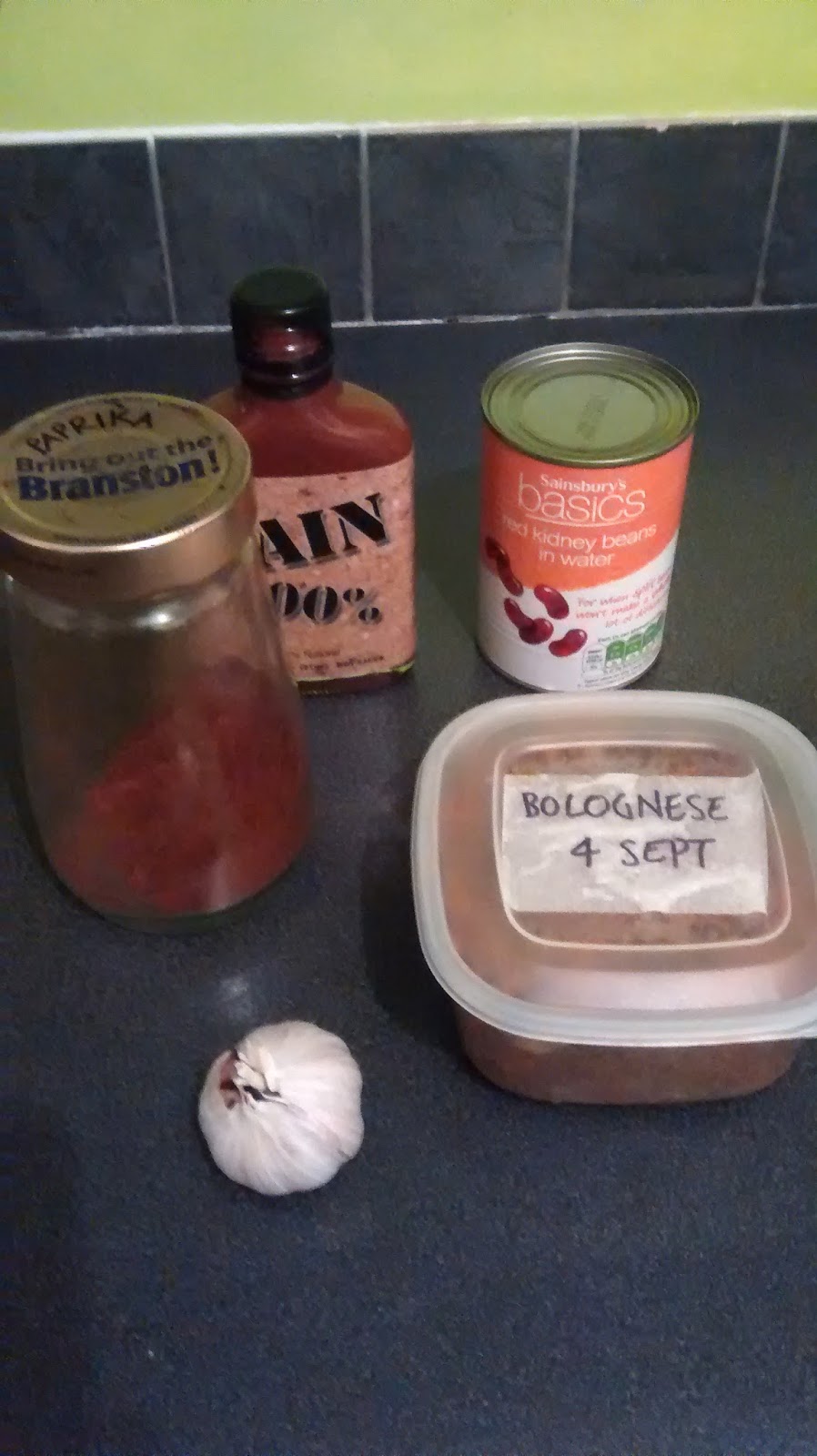 Aside: You'll note there are no chillis actually featured in the picture. Last year, Will and I went on a chilli-sauce buying spree (ran around all the local shops and bought every chilli sauce we could find) and we got 100% Pain from M&S. When we got home, we had a chilli-sauce tasting session, spreading each one thinly on oatcakes, commenting wisely on the strength and speed... We really didn't expect anything from M&S to have much kick to it. We spread it thinly, ate it, nothing much... oh, hold on, there's a tingle... oh - oh - OH - it's burning - SWEET MOTHER OF GOD MY TONGUE IS MADE OF SANDPAPER AND ON FIRE - we gulped milk straight from the bottle, we smeared yoghurt on our tongues, we licked butter, we wept, we laughed hysterically as the chilli-rush kicked in (that's your body firing serotonin out in blazes to try STOP THE PAIN), we tore strips from the wooden table with our fingernails, and then the pain finally subsided and we both collapsed and had an hour-long nap. So. We now have this stuff called 100% Pain, which really needs a pipette to dispense properly, but I've found that one level teaspoon in a litre of bolognese is just right to give it a good hefty chilli kick. So we're using it up, one teaspoon at a time. It may be with us for a while. 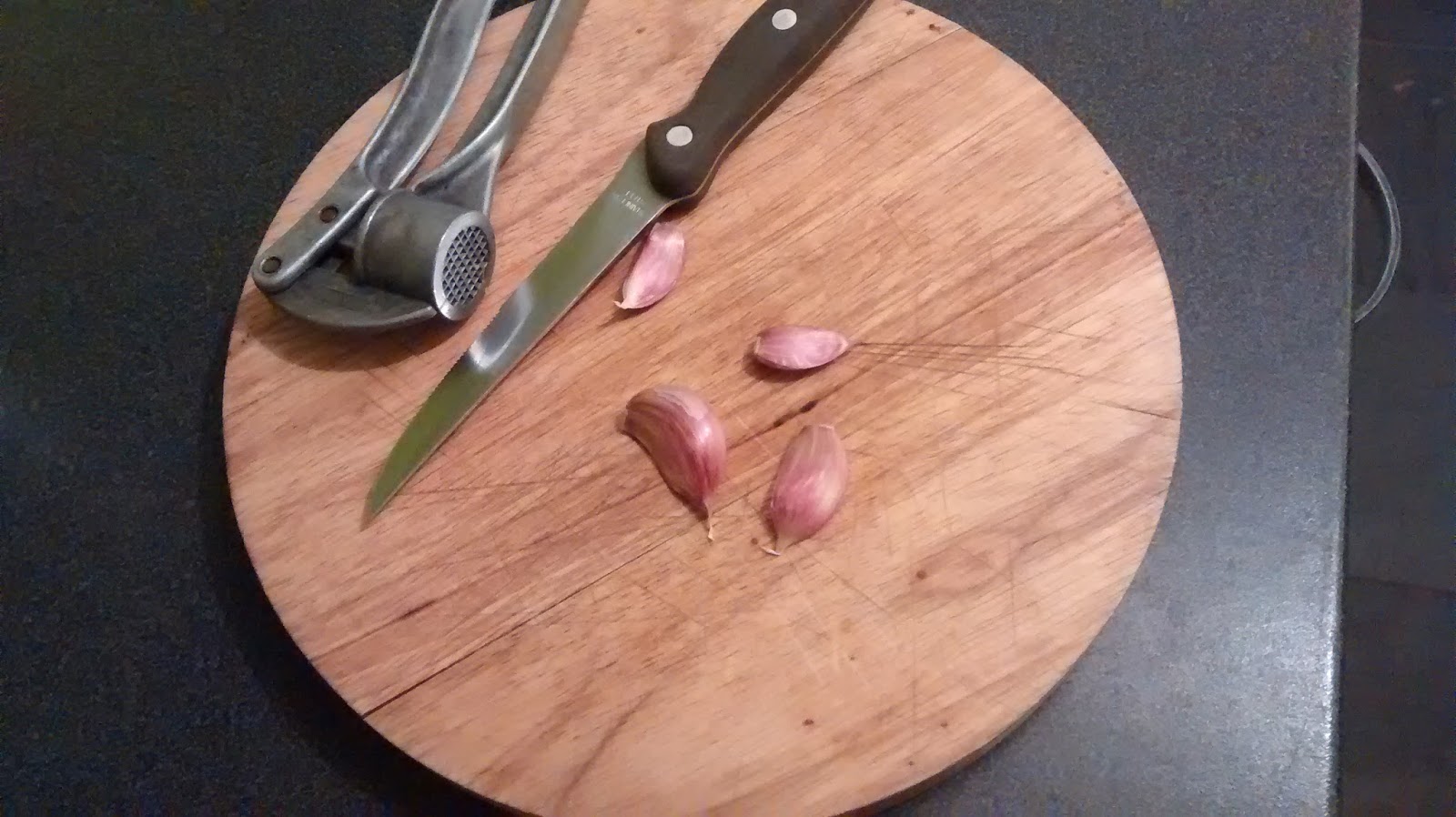 I felt like extra garlic, but you don't need it unless you fancy it. If you're using actual chillis intead of your insane murderous impulse-buy chilli sauce, chop them. 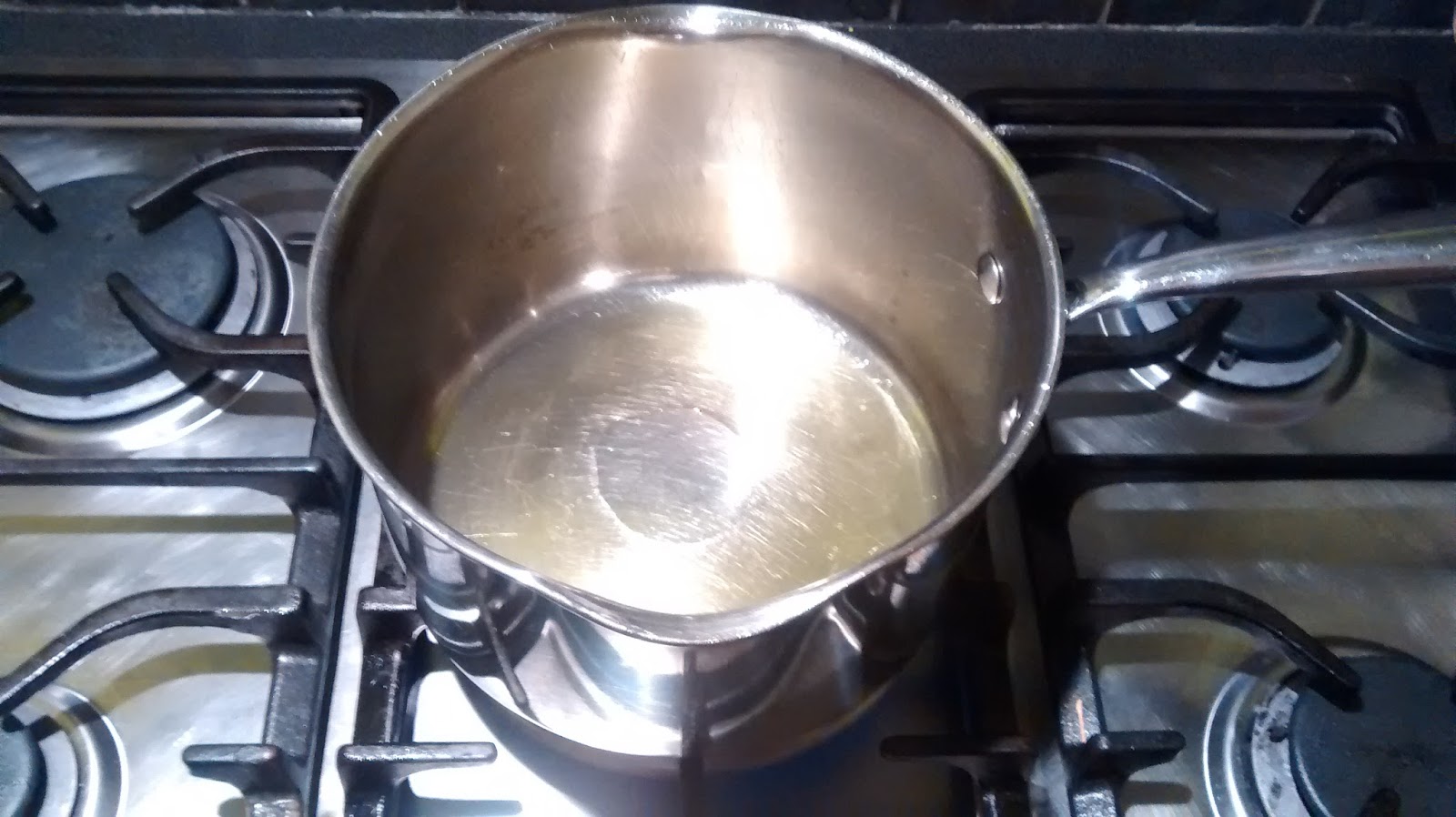 Melt the butter or ghee on a medim-hot heat... 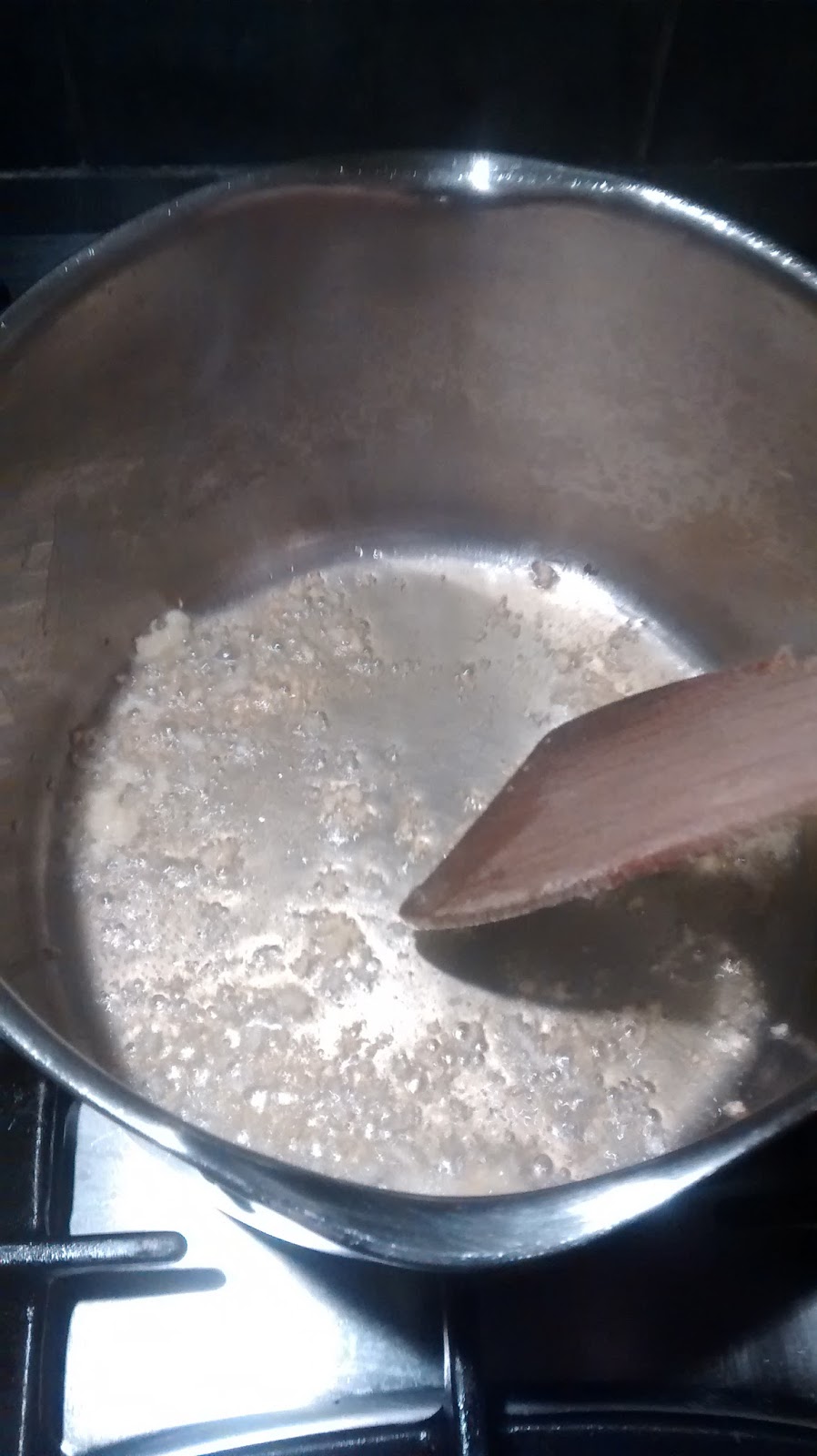 Stir in your chillis (and garlic, if you're adding that)... 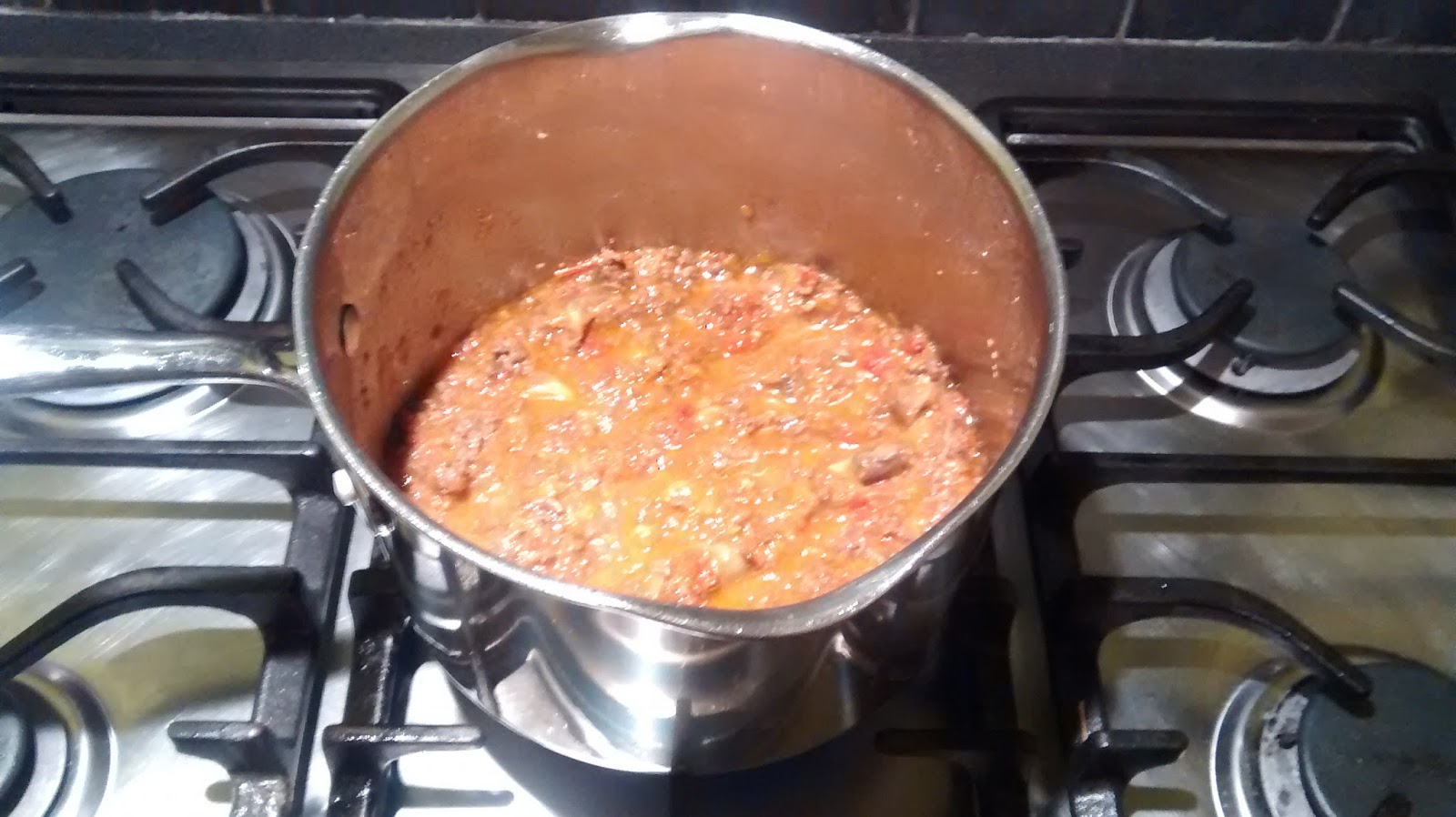 And pop in the bolognese, with the heat turned down to medium-low. 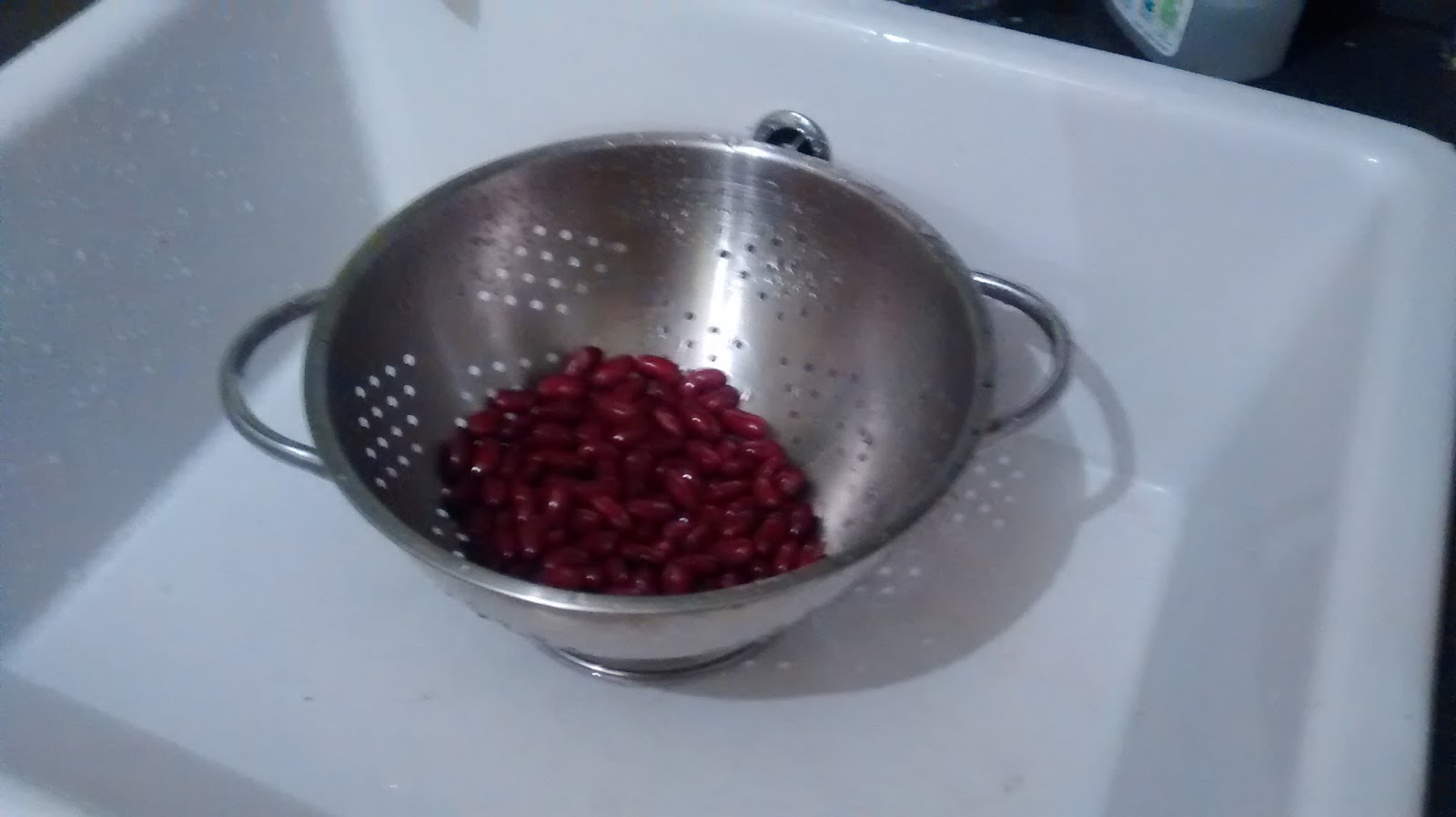 I rinse the hell out of kidney beans, I don't like the bean-juice in cans, some people are totally fine with that. 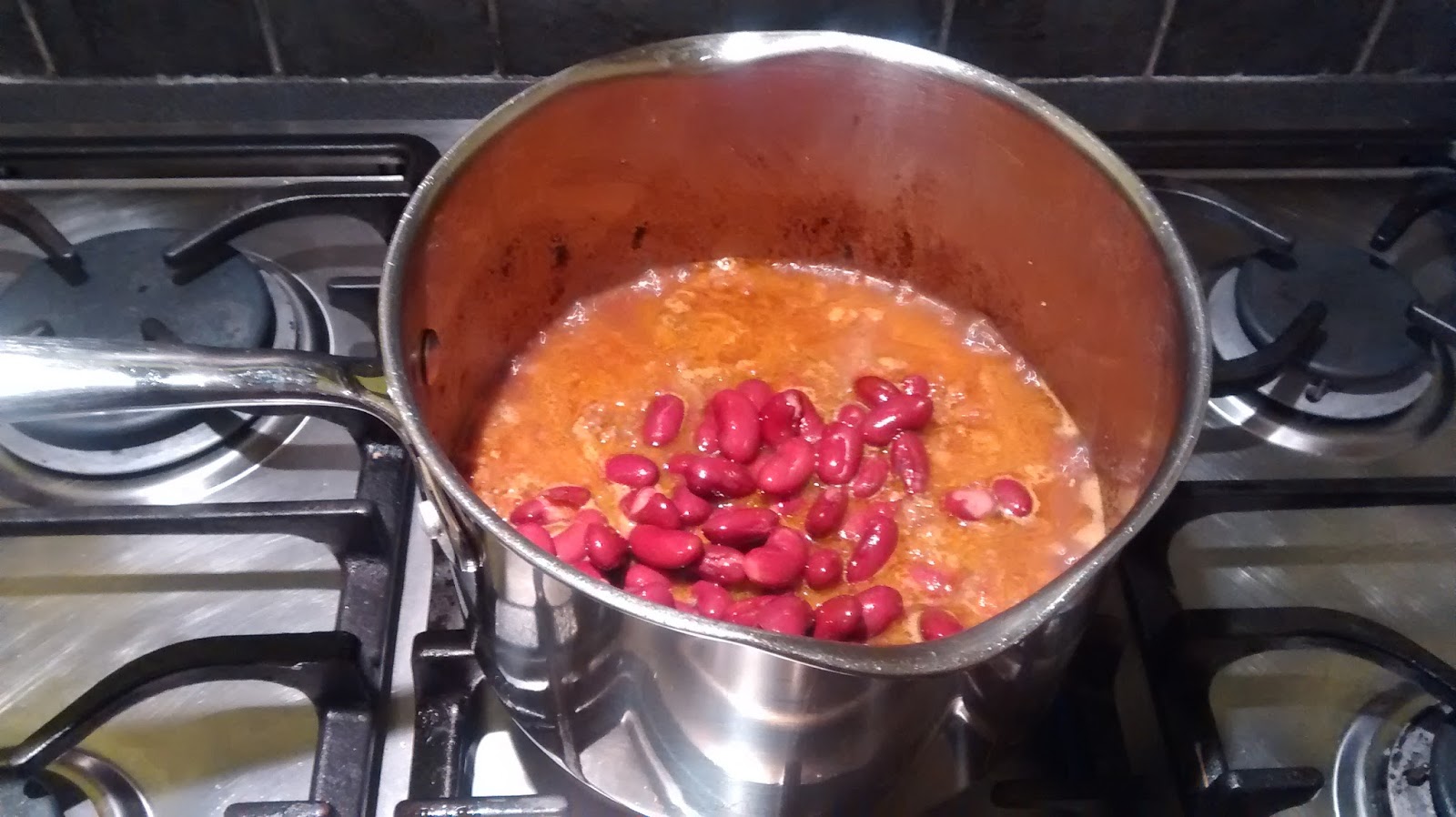 Throw the beans into the bolognese. 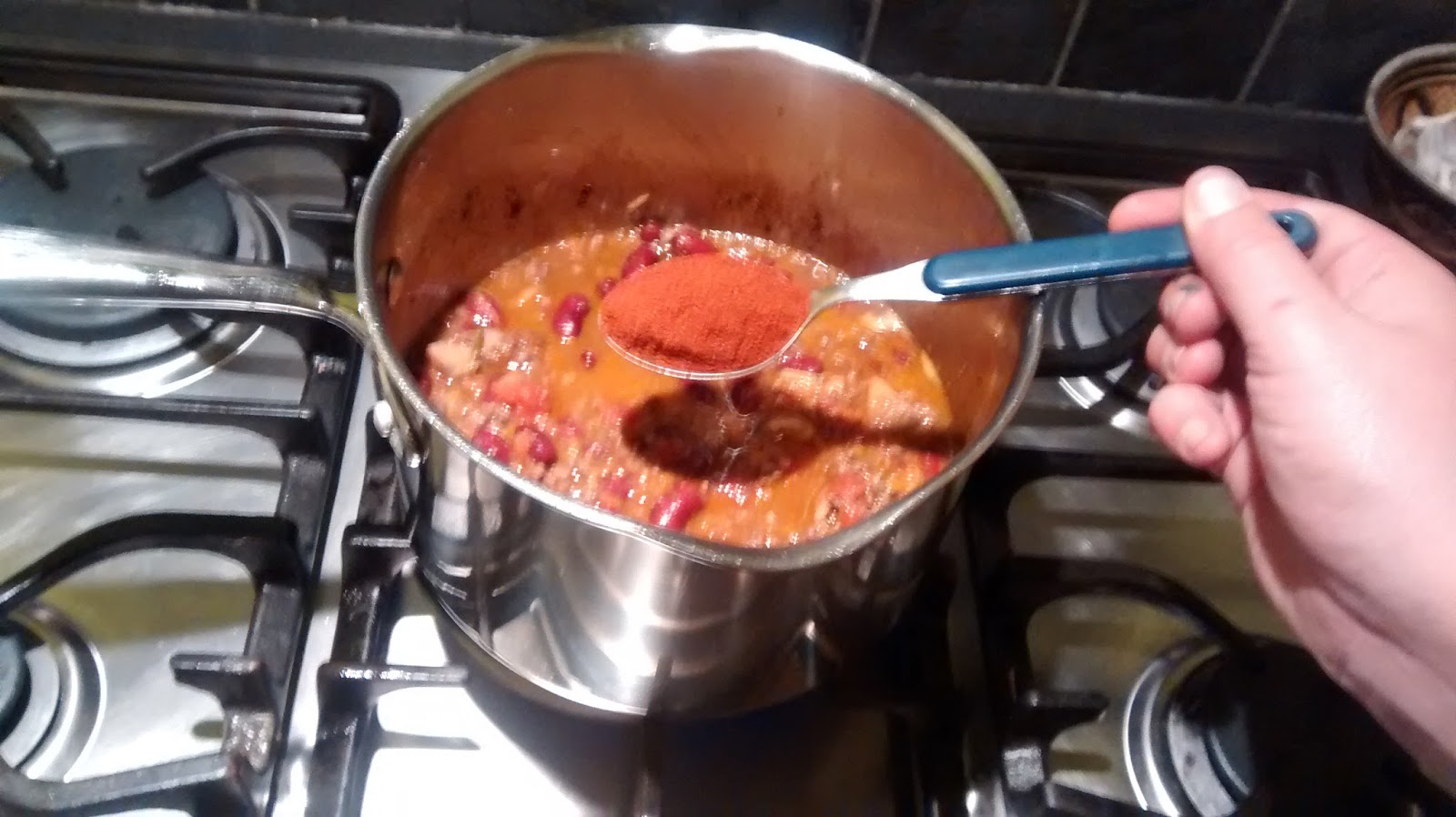 Add a good tablespoon of paprika. (You could equally add that just before you put the bolognese in.) 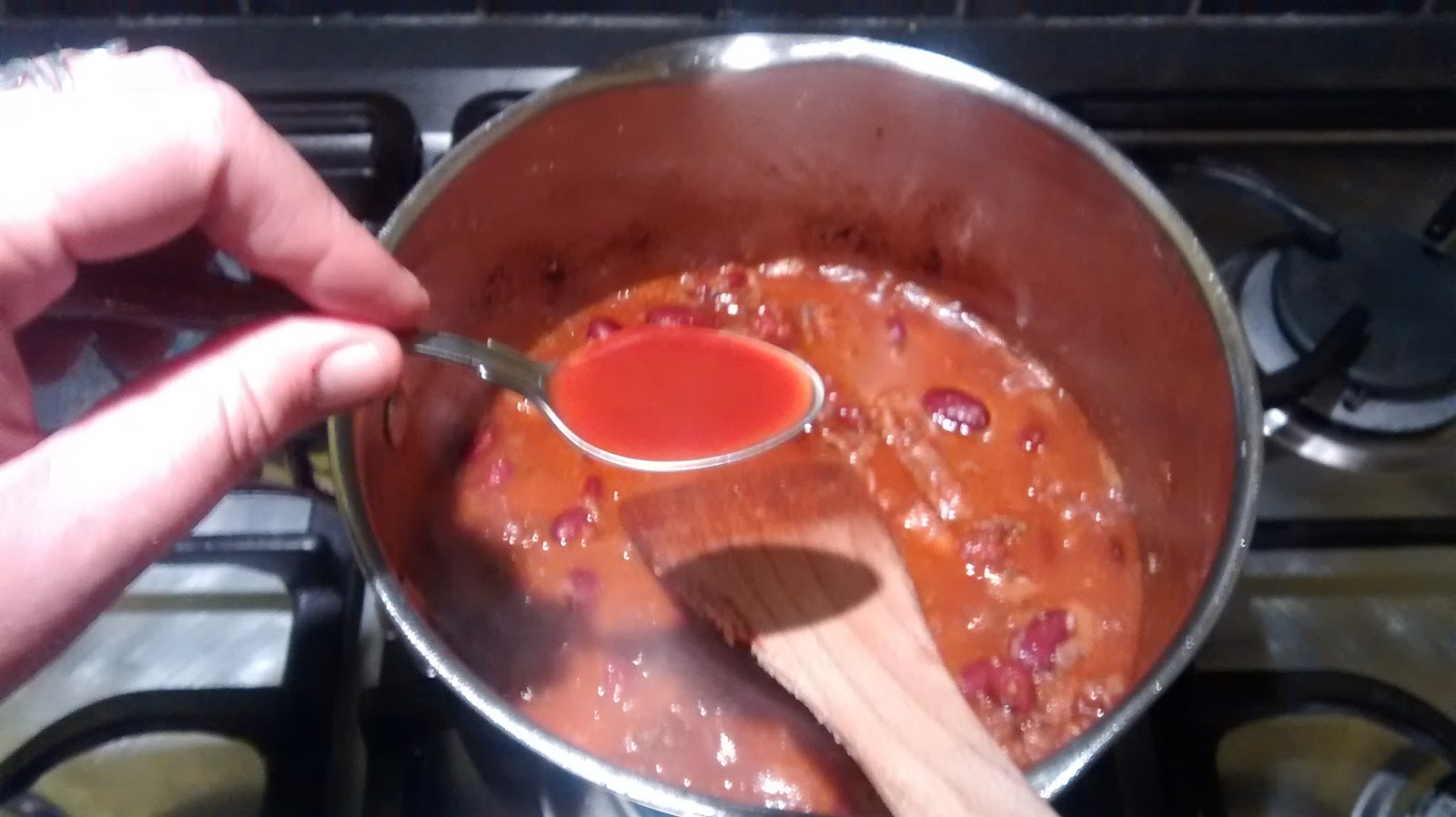 And here I am very gingerly holding a teaspoon of 100% Pain, being very careful not to actually touch the stuff. Imagine getting that on your fingers then wiping your eye... No, don't. 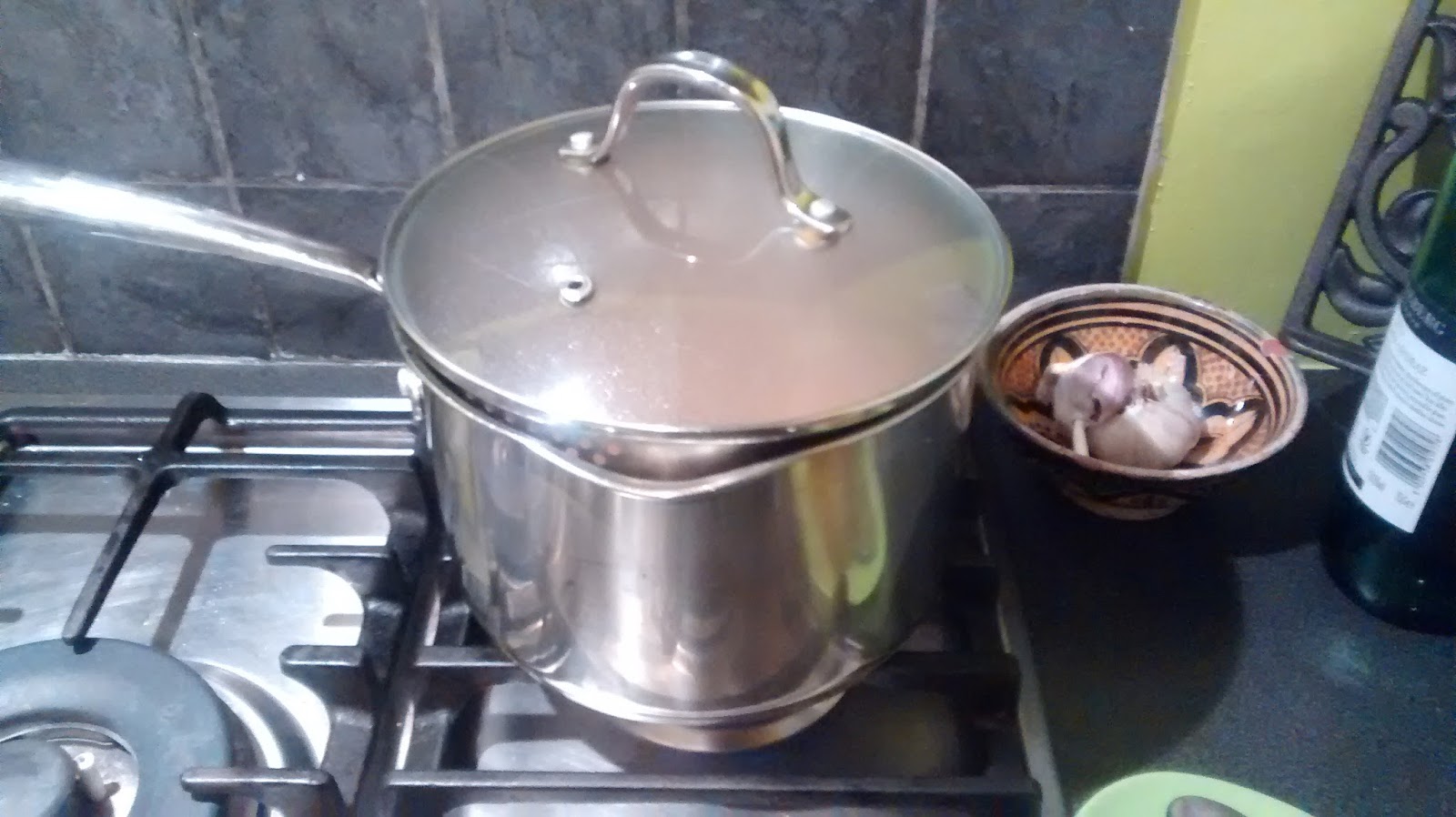 Cover it and turn it right down to simmer for about 30 minutes. Meanwhile, you can start the rice and prep any green veg you're putting with it. (I'm a perennial fan of dwarf beans.) 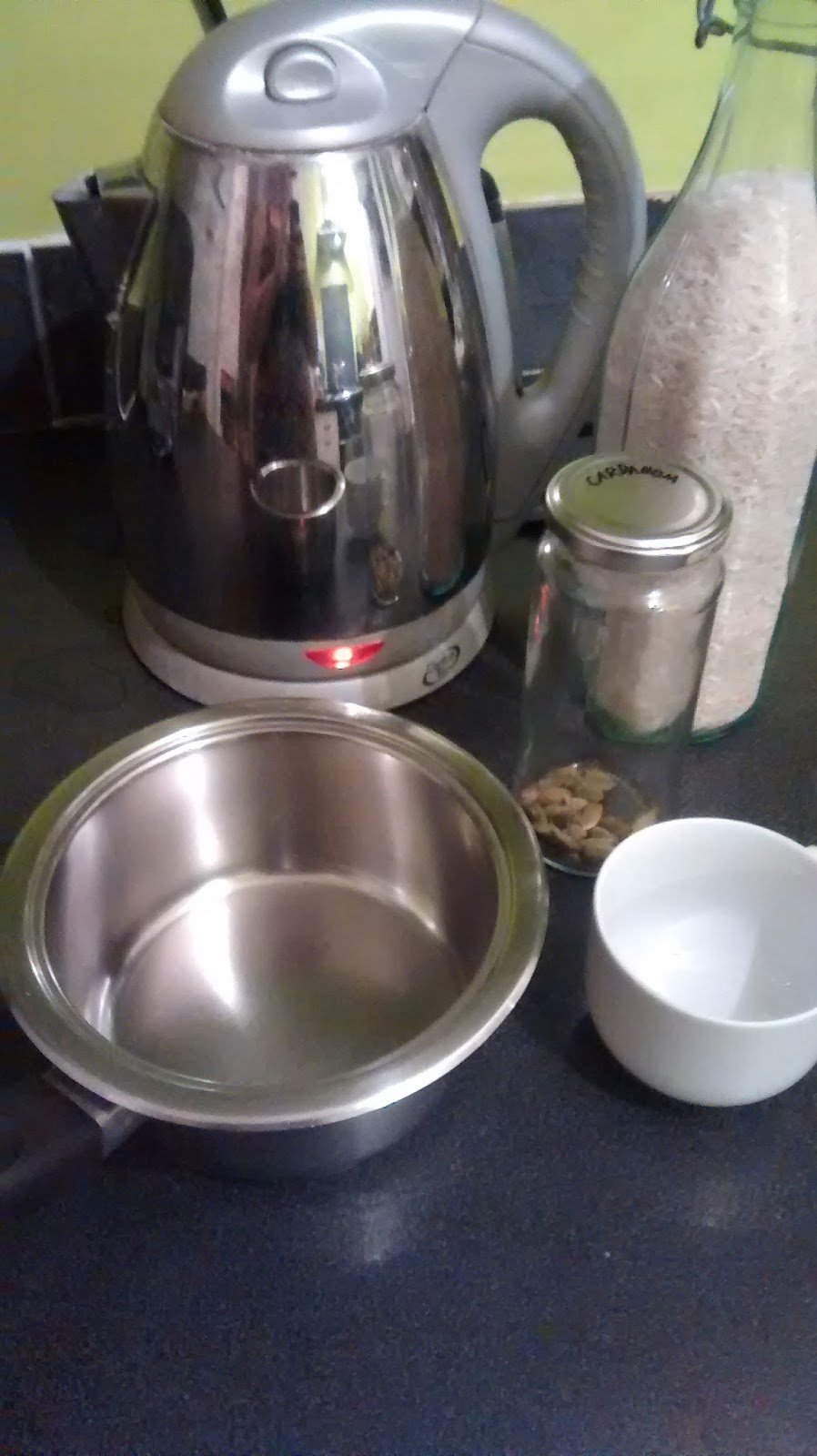 If you don't know the wonderful secret of Perfect Rice, here's how to make it.

And if you can spare a bit of your lovely chilli con carne once it's ready, you can keep some for fillings for tortillas - 2 tablespoons per tortilla.
Posted by Megan Kerr at 14:50